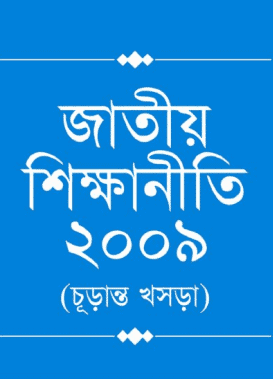 The present education policy claims greater acceptance than the previous ones due to its strong base on huge public opinion. Introducing public interest-oriented and scientific education policy has been the demand for a long. Again this education policy is the reflection of the Kudrat-e-Khuda Education Commission which was instituted just after our independence. The government has taken steps to reorganize the curriculum from class six to twelve keeping pace with modern knowledge, science and technology.

It has announced that the students will get the books under the new curriculum by 1st January 2013. By March 2012 the writing of books on the new syllabus and curriculum will be completed. The Education Minister released this news at BIAM Foundation in the National Education Policy 2010 seminar organized by NCTB and SESDP.  Some remarkable steps have already been taken to implement the present education policy. An implementation committee, 24 sub-committees have been formed to give it momentum. Completion examination after class five and Junior Certificate Examination for class eight, distribution of books across the country, distribution of computer, introducing lunch in some areas of the country to retain the students in the class manifest the steps taken by the government.

The present education policy says that the subjects which are taught as general subjects should be written keeping pace with the trend and culture of the country. Again, they need to be revised, rewritten and corrected when necessary. But coordinated law is necessary to implement the policy. It needs to be passed in the parliamentary session without delay. Education as rights should be ensured for the backward people. The proposed education commission must be formed immediately. To constitute an accreditation council to ensure the standard of public and private universities should be done without delay. To monitor the process chief education monitor should be employed.

The Education Minister said that the country now sees the curriculum adopted eighteen years back and implemented in 1996. Changes in the global arena, the demand for teachers and learners have taken place. So, to revise, change and extension of our curriculum is a must.  The aim of our education is to equip our children to face the challenges of the 21st century and imbue them with the teachings of values, honesty, and sincerity and patriotism and develop them as responsible and ideal citizens of the country. He added that everybody should not receive higher education, it is not necessary for all as well. Technical and vocational education is emphasized in the present education policy.

To bring changes he emphasized the duration of teaching time, the dedicated and meritorious candidates to be employed in the teaching profession. Establish a separate commission to select the deserving candidates for the teaching profession is not moving fast.  The minister informed that 75 books of secondary and four in the higher secondary level books will see change. After completing pre-primary and primary ( up to eight) a portion of students will be able to take admission in the secondary level and another portion in the vocational education. After the completion of secondary education students will have the opportunity to receive vocational education or higher education. Even the vocational educators also have the scope to receive higher education particularly those who are capable.

In this new curriculum from six to eight in general and madrasa English for 150 marks, Bengali 150, mathematics 100, Bangladesh and the World affairs 100, Science 100,  Environment  50, ICT 50  total 700 marks. 300-400 marks will be for their own stream. In the secondary level from class nine and ten, there will be Humanities, Science and Business Education groups.  For each group there will be Bengal for 200 marks, English 200, Mathematics 100, Religious Education and moral education 100, ICT 50, Education, Health and Games and Sports for 100 marks and total 750 marks compulsory and 400 for their own stream.

In Eleven and twelfth grades, Bengali will be taught for 200 marks, English 200, ICT 50 and Health Education and Games and Sports for 100 marks. Human qualities, morality, democratic values, discipline, patriotism, creativity, analytical capability, developing imaginative power are emphasized in all the streams and levels. The duration of class time will be increased from 35 to 50 minutes. Yearly leaves/vacations will be squeezed from 141 to 116 days.  The time of SSC and HSC examinations will be lessened to utilize more time for teaching-learning purpose.

Finally, for the implementation of the present education policy financing, education administration, public awareness stand as key factors which call for serious thought.  At present, the education field of the country sees only 2.3 per cent expenditure from national income. Other developing countries of the world already have been using 6 per cent of the GDP and Bangladesh promises to do it. The situation does not show any positive sign before us as we can collect only 11 per cent revenue income and to spend 6 per cent from it for education proves to be absurd. How far we are lagging behind in this respect can be deduced from the fact to learn that Japan used 43 per cent of its GDP for education since 1906-1911 (Samakal 21 September 2011). And where we stand after one hundred years!

Still, most of the students of universities in Bangladesh belong to a relatively higher economic class of society showing the opportunities are open for the higher segment of the population. In respect of higher education, the emphasis should be given to infrastructure building, research capacity enhancement and technological uplift. Public universities should construct safety nets for the pupils coming from a poor segment of the population. The private costs of primary education are high for poor families because of the high opportunity costs of education and expected benefits are lower for poor families out of primary education. Still, free education for the primary students fails to lure them to complete the circle because of timing. Most poor children have to spend the hours when they are supposed to earn something for supporting their families. Some NGO schools are running keeping this view in mind which can be taken as role models.