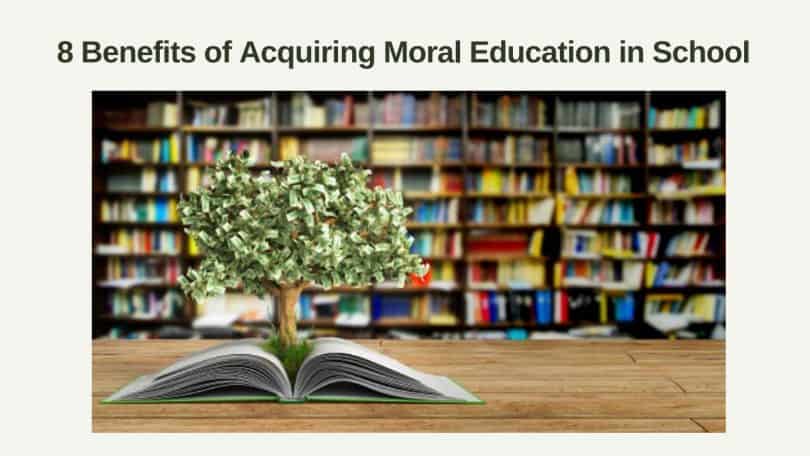 We are now faced with such kind of students who is growing up with the Internet age, compared with students in the traditional sense; their vision is broader and more extensive access to information. Schools, teachers are no longer their only source of information and sources of influence. As a new generation of young people, they are no longer blind obedience to the authority of teachers and parents only rather they are assertive and independent learners which pose a serious challenge for the present-day teachers. In this perspective, imparting moral education to the present day learners gains ground.

Moral education enables children and young people to explore the world’s major religions and views which are independent of religious belief and to consider the challenges posed by these beliefs and values. It supports them in developing and reflecting upon their values and their capacity for moral judgment. Through developing awareness and appreciation of the value of each individual in a diverse society, religious and moral education engenders responsible attitudes to other people. This awareness and appreciation will assist in countering prejudice and intolerance as children and young people consider issues such as sectarianism and discrimination more broadly.

The experience and outcomes of moral education lead children and young people far beyond the local context to national and international contexts. Values such as justice, wisdom, compassion and integrity are constantly being enacted through all aspects of the life of the school as a community. They can be further developed through exploration and discussion in moral education. Children and young people should be given opportunities to participate in service to others and to meet people who show their faith in action. They will learn from all those who offer inspiration, challenge and support. This practice will add perfection to the bookish and institutional education and learning.

Moral education experiences and outcomes encourage links with other areas of the curriculum to provide learners with deeper, more enjoyable and active experiences. These experiences contribute much to the development of the four capacities of successful learners, confident individuals, responsible citizens and effective contributors as described in Building the Curriculum. Teachers of religious and moral education recognize the value of pupils developing mature and respectful attitudes to religious and cultural diversity. Scottish society currently embraces an exciting range of beliefs, values and traditions.

This is reflected within their school communities. Teachers of religious and moral education understand that Curriculum for Excellence provides a unique and valuable opportunity for Scotland’s young people. Engaging with the beliefs, values and traditions of the world’s religions and philosophies can challenge young people to think more deeply about their own beliefs and values. There is much scope for schools to link themes within religious and moral education to other areas of the curriculum such as science, the expressive arts, health and wellbeing and across the school subjects through the study of ethical, social and moral issues. Religious and moral education departments have traditionally made a strong contribution to wider aspects of learning which can be further developed through the curriculum. Effective teaching in religious and moral education provides a wide range of learning experiences that promote links with the home and family life, the faith community to which a child may belong and the local community more broadly. In our education system, students learn religious subjects as compulsory ones but their impact raises questions.

I attended a session at BRAC University conducted by Anisul Haque, the famous writer of Bangladesh and an engineer. He cited an example during his BUET life. The students of BUET were asked how many of them would take bribe during their service life. Eighty- six per cent of students shamelessly answered they would take bribes. Seven per cent remained silent while another seven per cent answered they would not take bribes. It is usually believed that the most brilliant students (according to the results at least) study in BUET. If eighty-six per cent of them would take bribe and taking bribe seems easier and a common matter to them, what the country expects from them? Then he told us our higher educational institutions produce hundreds and thousands of educationists, doctors, engineers and researchers. Still, the situation of the country is so miserable. Why? Their morality has disappeared. Their love for the country has vanished? We gave them materialistic education, not a moral one. Until and unless moral education is imparted to the students the country cannot expect true service from them. The behaviour of our doctors rightly proves it.  Our educational institutions just produce something which equals inanimate good objects.

Religious and moral education departments have traditionally made a strong contribution to wider aspects of school life and created opportunities for pupils to achieve through active participation in projects which make a difference to the lives of others in many countries.  This is an aspect of learning which can be further developed through effective teaching in religious and moral education. It provides a wide range of learning experiences that promote links with the home and family life.