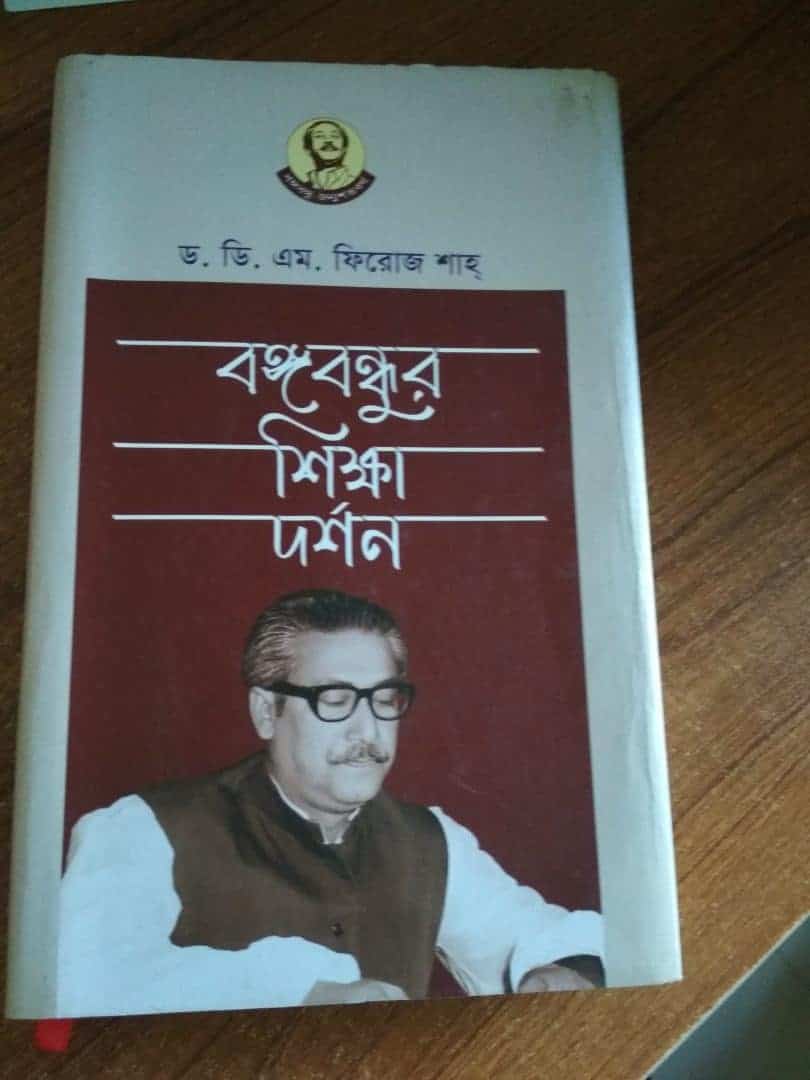 Thirty-eight essays on education and one poem related to education and another five essays of Bangabandhu where he pays tribute to Hussain Shahid Shawrawardy and Tofazzal Hossain Manik Mia have enriched this moderate volume book where the author has planted the education philosophy and information of Bangabandhu that he collected after ransacking every source of information considering ‘Karagarer Rojnamcha’ (everyday life in the goal) as a strong base of information along with Bangabandhu’s different public speeches he made in different times and different occasions. How a visionary leader like Bangabandhu implemented a constitution, established an education commission headed by Dr. Kudrate-E-Khuda, nationalized primary education, founded Islamic Foundation, declared university’s autonomy within his short tenure of merely three years, seven and a half months really talk about his deep concern and intense attraction for education.

The author has sucked up the educational elements from his eventful career and presented them before the readers. Bangabandhu perceived the truth that without education, the war-torn nation would not go ahead. This honest thought impelled him to establish an education commission, nationalize primary education, and form the university grants commission, unleashing its freedom and autonomy.

The globally acclaimed and world-famous speech of Bangabandhu that came out on 07 March 1971 mirrored the life philosophy and education when he uttered, ‘Today the people of Bengal want freedom, they want to remain alive and establish their rights.’ Through his book Bangabandhu’s Education Philosophy (18 March 2017), Dr. Anu Muhammadhas identified132 areas that directly talk about education with the initial one `there lies no alternative to employing capital for education to establish a sustainable society.’

Our only similarity with the Pakistanis is religion, still, people’s observing religious rituals see the difference. Geography, food habit, dress, socialization and conduct and behavior of Bangladesh prove different from the Pakistanis. Bangabandhu wanted education suitable for this country, its culture and health that stands as the best example of his education philosophy. The basic principle of education and its philosophy is to do good for all sorts of animals. To ensure adequate and better living for humans, along with other animals, is education. Knowing thyself is another principle of education that Bangabandhu proved in his life by making self-evaluation since his boyhood serves as an excellent example for us. He expressed his own opinions and desire and begged pardon if any mistake occurs that exposes his generous heart.

The real and practical reflection of Bangabandhu’s education philosophy lies in Dr. Kudrat-E-Khuda Education Commission’s report. His mixing and talking with people of all levels gave him ample opportunity to learn what education people truly needed and accordingly he directed and set the education commission that was formed by government order on 26 July 1972 and famous scientist Dr. Kudrat-E-Khuda was made its chief and the commission submitted its report on 30 May in 1974 where they announced and acknowledged the constant and sincere guidance  Bangabandhu extended to develop the report and without his direction, it would have been really difficult to make it happen.

Without his assistance, encouragement and interest, it would not have been really possible. Thus, the commission expressed its debt to Prime Minister Sheikh Mujibur Rahman. The culture of disrespect dishonor we experience in every nook and corner of society. But Bangabandhu used to respect people irrespective of their position and status. He used to appreciate even a little thing. One incident tells us that an inmate of jail gave him two pieces of lemons that received immense praise from Bangabandhu and the typical inmate of the jail worshiped him as a great man. His enemies and opponents also experienced soft and kind behavior from him. He used to appreciate all whenever any opportunity emerged. He used to judge people learning their hearts, not the external beauty of the body. All this bear testimony to his philosophy of education.

A great leader like Sheikh Mujibur Rahman gathered knowledge from the meeting, mixing with people of all levels, slogans, environments and situations, his source of acquiring knowledge was books as well. As an avid reader, he read books of multiple areas to learn the opinions, history and drink the juice of literature. This habit convinced him to keep some books as his constant companions.

During his stay in jails, his wife sent him books regularly to satisfy his mental hunger and thirst. He himself collected books from jail libraries. Besides, he used to read newspapers very regularly as newspapers exist as living documents of the nation and the globe. His deep passion for learning and education is exhibited through a personal library in his Dhanmondi house number 32. Even many teachers are not seen to cultivate this culture. He used to study ‘Sangsaptak’ of Shahidullah Kaiser in jail. The books of Tagore and Nazrul were his most favourite, of course, he used to study the books of Sharatchandra as well.

The current Prime Minister Sheikh Hasina has shared an excellent memory regarding Bangabandhu’s love of books in this way- `My father had some old books among all of his books, particularly the books sent to jail were censored. He had some particular books which he used to keep with him since his jail life in 1949. He used to contribute his books to the jails’ libraries; however, these particular books he brought back with him at the request of my mother. Some books of Tagore, some Nazrul, and several books of Bernard Shaw were censured putting official seal. These are the burning examples of how much he loved education and books.

He was a keen observer of the society where a little thing could hardly escape his notice. Love, young people’s love, emotion, and hasty marriage that leads to separation have received his comments and opinions. He says, I do not find any harm if a boy and a girl develop a love affair and get married according to their choice but I do not like its crossing the limit exposing their shameless attitude and activities. Society gets ruined by it. Many such couples do not find peace and happiness in later life and you see the case of separation has increased in society. This does not bear a good sign. So, I think female education is a must.

Without their education, the country cannot see real emancipation. Society must cast its glance at the shamelessness (page 123-Karagarer Rojnamcha). This aspect of society did not escape his attention. We have things to learn from nature, natural objects, birds, and pigeons. He eyed closely from his cell in jail. He got astonished to see the perseverance and patience of the raven; their sense of unity and defeating the enemies gave him ample food for thought and elements of learning. He then mentioned if Banglees had the unity like those ravens against the Pakistanis they would definitely win. Their unity is greater than that of the Bangalees. How nice and minute observation! We do not learn things only in the classroom, institutions and from the teachers. We learn from nature, from our surroundings, even from little creatures. He has set bright examples for us of how to gather knowledge from these sources around us.

Universities, the highest seats of learning, should offer free and open space for the learners and teachers and autonomy can ensure that Bangabandhu understood. He, of course, perceived and experienced it during his student and political life. The Pakistani rulers attacked the universities’ autonomy and as an upshot of it, Ayub Khan released Abdul Matin Chowdhury, a renowned educationist from Dhaka University that Bangabandhu considered as open intimidation and encroachment of the government into the sacred place.

He wrote under this perspective, ‘the autonomy of Dhaka and Rajshahi Universities has come to an end. Now it will be easier for the government to conduct an operation in the campus. Leave your pen; go ahead. Learn how to wage arms and use lethal weapons.  Buy some oil to apply it day and night, when suitable. No need to study, you will be able to become even a minister, get a promotion. But I just think about what has happened and where we are heading to”.

Bangabandhu told on 25 December 1971 ‘if we want to establish people-oriented education policy, we need to make plans and programs and this is why education commission has been formed and you see, members have been selected without considering their political affiliation and beliefs so that they can bring some real changes. Politics prevails everywhere, but I want no politics here. It is far better not to nurture politics in the universities.’ Great learning, he has kept here for us. Our universities’ current situation reminds us of this great leader’s thought, plan, and treatment towards universities.

The people of Bangladesh have achieved independence going through the hurdles and ordeals of suppression, oppression and a series of bloody struggles. During these long struggles, they did not bow down their heads to the Pakistani Rulers and did not give up their hope of embracing better days. When that real dream came true, they wanted to form a practical and suitable education commission to steer the nation towards the path of real prosperity, love and cooperation. Bangabandhu held that oar to steer the nation forward.