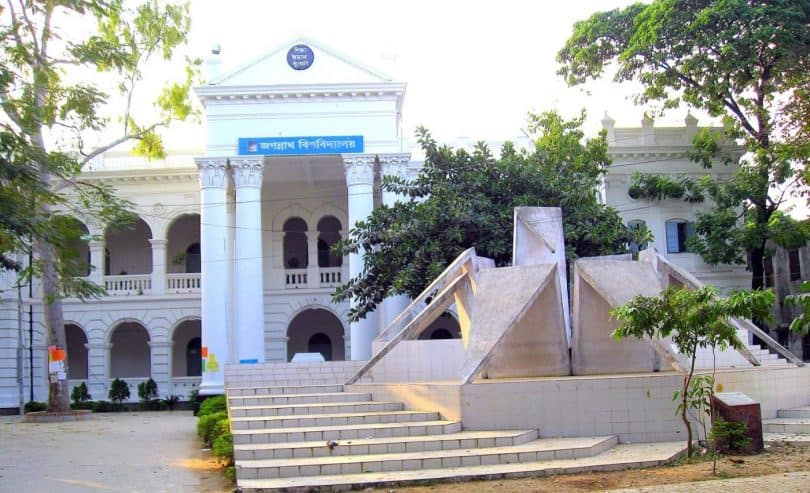 Jagannath University witnessed a sad incident that ensued from section 27/4 of the Jagannath University Act 2005. The Act says that the university will be run by its own income after enjoying five years of public funding. Things are not unknown to the pupils enrolled in the university, to the teachers and the guardians. Even then, why did it happen? The students went berserk and rampaged many cars and vehicles creating huge chaos.

They vandalized many buses creating a threatening situation. The authorities should have been prepared as they were quite aware of the time to end public time funding of the university. The Jagannath University authorities on 29 September 2011 held a top-level meeting to come out of the stalemate at the university while the students at a press conference in Dhaka University declared a peaceful demonstration during the puja vacation to press home their demands which include an amendment to the Section 27/4 of the Jagannath University Act, withdrawal of all the cases against the students and journalists, recovery of 12 dormitories from illegal occupiers and solutions to the students’ accommodation and transport problems.

The meeting presided over by Jagannath University VC Dr. Mesbahuddin Ahmed in the presence of deans, teachers, departmental heads, officials and staff at the university’s central auditorium decided that authorities will get in touch with top government officials by October 9 when classes resume about the cancellation of the section 27/4 of Jagannath University  Act 2005. The Act stipulates an end to public funding for Jagannath beyond July 2012 an issue that has sparked off the student agitation. The authorities will construct three dormitories and rent at least two buildings near the campus to provide accommodation to the students within one year. Sources at the meeting said the three halls including one for female students would be built on lands to be gained through the recovery of occupied dormitories and a playfield of the university. They are Bani Bhaban on Pyaridas Road and Dr. Habibur Rahman Hostel in Golok Paul Lane and the Dhupkhola Math.

The Vice-Chancellor of the university said that they discussed various issues which seemed to them to have triggered unrest among 23000 students. During the reign of Ayub Khan and Munaeem Khan, the college was nationalized and the student organizations of Chattara League and Chattra Union protested against it. They took it as a part of narrowing the scope of higher education. During that period students’ active participation in politics or protest against any government decision was seriously controlled by government colleges. The students of this college easily participated in many protests and slogan against the government but the nationalization might show a different picture. This notion led the students to against Ayub Khan’s decision. Today the decision of half-privatization has once again triggered student anger.

It was the demand of the students, guardians and all to turn Jagannath College into a fully-fledged university as forty thousand students were chirping on the campus. The government of Khala Zia responded to the demand and declared it a  fully-fledged university in 2005. But she declared the supply of government money to the university would be squeezed gradually and after five years it will totally be withdrawn and replaced by student fees after the fifth year.  It means students have to spend more than Tk 20 thousand instead of five or six thousand annually. Public universities usually enrol bright but poor and middle-class family students. They hold the right to receive higher education at a cheaper rate and it is the responsibility of the state to ensure higher education for them.  Comparing their educational expenditure with that of private universities should not be done.

The students of this university say they don’t have residential halls. Though the university possesses twelve halls, they are illegally occupied by political musclemen. University is helpless to recover the halls. Whereas students coming from the remotest parts of the country have to reside in the mess where they don’t; have the propitious environment to study. They also say that the teachers are busy with politics.  They are employed mostly on political ground. As a result, they don’t have any acceptability to the students. The teachers use the student cadres of the party in power to suppress the demands of the students. Students should have been united in their legal demands but we saw a different picture. A group of students along with the police were chasing the demonstrators. It is has been voiced many a time in the country whether student politics with its present face and status should run. The response from the government has always been mysterious. Probably this is the cause which we witnessed at Jagannath University incident.

Another two similar universities namely Kazi Nazrul Islam university at Mymensingh and Comilla University belong to the same category in terms of financing. These two universities will enjoy receiving public fund for up to ten years and they will be run by their own financing.  As Jagannath was an old college turned university and in the capital city, it was supposed to enjoy public fund for five years. Jagannath University saw admission business conducted by student leaders of both the parties namely AL and BNP. The authorities could never control this business. Probably the culture still exists. The university could have started the subjects whose demands are high in the job market as many private universities teach. Subject choice by the university authorities was not reasonable. Whatever might be the reason, the anarchy unleashed by the students does not deserve any support. The way they behaved does not retain any solution rather their legal demands have got shadowed with darkness and sparked public anger.

The Vice-Chancellors and the authorities of  Jagannath, Kazi Nazrul and Comilla universities must be quite aware of the fact that these institutions are neither private nor public. Their mode of operation should be different. They must find out the ways and means to develop the sources of income and introduce exchange programs between the universities of foreign countries. Finally, a public and private partnership must be developed in the real sense of the term. Motivation for the students is a must. A dedicated, active, energetic and really brilliant cluster of teachers must be employed in the university who must show their innovative ideas to run the university forward.