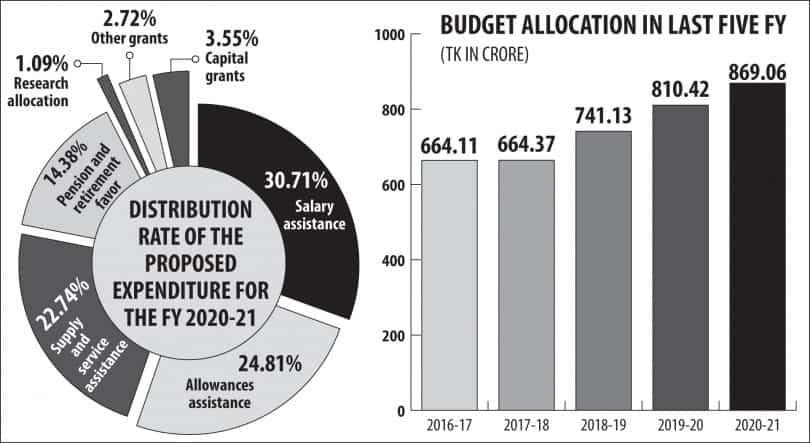 Our finance minister AMA Muhith placed the 2014-15 fiscal budget in the National Parliament on 5 June 2014. To make an education budget for a developing country is really a daunting task. We cannot make our budget successful even in our families. It remains room for criticism and mostly for feedback. The blind self of humans shades some sides which the doer cannot see until and unless the observers give feedback for further development. So, any kind of feedback tends to further the development of the existing situation. As I belong to the education discipline, my constructive criticism and feedback will also remain confined to the education budget of the country.

Education is undoubtedly a major driving force of development in any country. There lies a direct relationship between education and poverty alleviation. Also, it has close relations with health and hygiene and all other sectors which call for raising the consciousness of human beings. The government has also given topmost priority to the education sector. It enhances promoting technical learning, modernizing madrasa education, and freeing educational institutions from corruption and political interference.

Muhith says, “Steps will be taken to enhance cooperation and coordination among all the government and private vocational and technical institutions. The ongoing construction work of technical schools in each upazila will be completed soon. Bedside, vocational training courses will be introduced at secondary and higher secondary levels”. Modernizing madrasa education and the spread of technical education get due importance in this budget which we appreciate. The minister says that his government is a commitment to continue with the policies they pursued in the education sector and sustain the achievements they made during their last tenure. He hopes they will succeed in implementing most of their plans set out in the Education Policy 2010 in this tenure.

To this end, they will lay the highest emphasis on improving the quality of education adopting modern technology-based teaching methods, and continuing adequate infrastructure building. He hopes this education budget will improve the teacher-student ratio to an acceptable level. Setting creative questions for all the subjects, continuing the ‘Creative Talent Hunt’ initiative to recognize and reward the young talents, establishing public and private universities in all the districts of the country, and promoting research in the institutions are the other significant agenda to be implemented in this budget.

The minister claimed that at present the country sees almost 100 percent enrollment at the primary level. Actually, the figure raises questions as several types of research show the figure stands far below the government claims. Placing the national budget is a little bit politically performed but this year it will be a little bit different as there is no actual opposition in the parliament who will show their instant reaction. But, we request the government to provide the nation the real picture otherwise it may create another sort of problem in the future. With a view to eradicating illiteracy, the government is planning to provide 45 lakh illiterate adolescents and people belonging to the age group of 15-45 years with basic literacy and livelihood training. Undoubtedly, it is a good initiative if it really can be implemented without any political touch and color.

The National Education Policy 2010 promises to upgrade the primary education level up to class eight by 2018. The government has already started the process by introducing classes six and eight in 754 primary schools and gradually all other primary schools will be brought under this process. The government has also introduced a pre-primary education program at all primary schools. By this time, a curriculum has been developed and books have been printed. Side by side, the government has formulated an inclusive education manual for the retarded children and people living inaccessible areas. The relevant teachers have also been trained on the manual. All these initiatives fall on the positive side of education and we must appreciate them.

It is true the government has increased budgetary allocations to the education sector over the years attaching top priority to it, the allocation this year is still far behind the expected level. In terms of percentage of GDP, Bangladesh spends 2.2 percent on education which remained almost static for the last few years. The UNESCO declaration says that the allocation for education should be at least 20 percent of the national budget and 6 percent of the GDP. It clearly shows we lag far behind this global standard of allocation. For education, the Maldives spends around 8.5 percent, Vietnam around 6.6 percent and Nepal over 4.7 percent, and India 3 percent of their GDP. Our position clearly shows where we are in this race. Again, the education sector witnessed rapid growth with the increase in students, teachers, and intuitions in the last decade. But according to this increase, the allocation for education does not show a well proportionate figure. This sector sees Tk 29, 213 crore in the fiscal year 2014-15, which is 11.66 percent of the total budget and 10.96 percent more than the revised budget of the outgoing fiscal year.

An allocation of Tk 13, 673 crores was set for the primary and mass education ministry and the rest for the education ministry. The percentage of the total allocation, however, does not match the figure five years ago. In the revised budget for the 2009-10 fiscal year, the figure was 14.3 percent. In the revised budget for 2010-11, the percentage was 14 which slid to 11.4 percent in 2012. In the 2012-13 fiscal year, the percentage stood 11.1 percent. “The allocation is not sufficient even for implementing the fundamental commitment like the National Education Policy 2010 and National Skills Development Polity”, said educationist Rasheda K. Choudhury.

Muhith says that under this budget, the poor students will be given assistance and headhunting will be initiated to evaluate the creative skills of students, and stipend will be given up to the graduation level students. Giving stipend to graduate-level students does not prove to be a sound decision. Usually, our graduates remain unemployed, as they do not have the technical skills to manage jobs. If we give them a stipend it means we will encourage producing more educated unemployed people. Giving free books to all the students irrespective of urban and rural areas, poor and rich students, and accessible and inaccessible areas should be given a second thought.

Only the poor students and those who live in vulnerable areas should be given free books, not for all kinds of students. Free book distribution employs all the strength and efforts of the education sector which fails to ensure the quality of education. The whole workforce remains engaged in doing this job almost half of the year and cannot give attention to quality and question leakage issues. Through book distribution programs books from the market have disappeared. We cannot buy necessary books which have been controlled like socialist countries. Education materials should be open and free. It has also created some room for corruption and politics at the field level. Downloading books is not possible always and all the places but the whole system claims a huge amount of money with which quality does not go.

As many as 37 672 posts have been created to recruit additional teachers at the primary level and the minister also appeals to the private sector to come forward and invest not only in providing stipends but also in building school infrastructure and improving the conditions of teachers. Yes, to ensure quality education teachers’ improvement is a must which this education budget must show a clear guideline. It is good the government has understood that the political interference has seriously downgraded our education which the minister vows to remove.

He says, ‘We will exert our highest efforts to make school and college management system more democratic, participatory, accountable, transparent and free from partisan interest. The system of forming committees in schools and colleges will be changed to free the intuitions from political interferences and corruption’. Clear guidelines must have been in this matter as it disturbs the education sector a lot to go forward. He also talks about the quality of medical education which is very important at this juncture. We are producing thousands of medical graduates every year through our public and private medical colleges but fail to produce quality doctors. We spend a lot of our national money every year for treatment outside the country. We must think of this issue also very seriously.