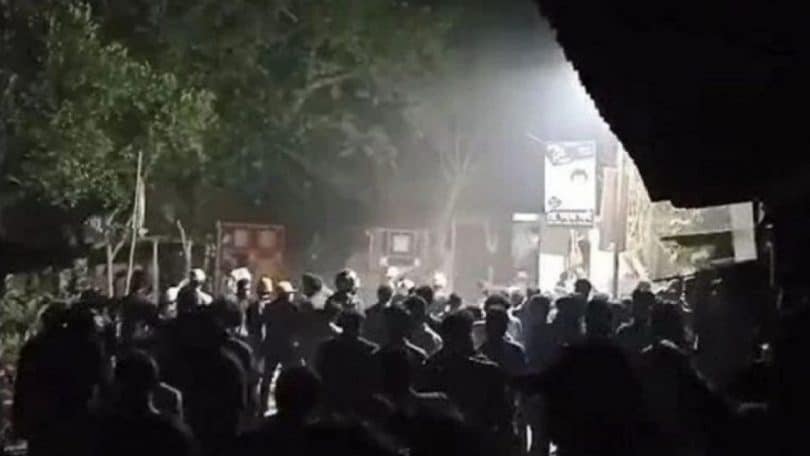 Even during the closure of corona two public universities namely Barishal and Jahangirnagar witness a very turbulent situation. On 16 February an altercation took place between a BRTC bus conductor and two students of Barishal University. At one stage, the conductor swooped on the student with a knife and harassed a girl student following that incident. In response to that, students took to the street to halt the traffic and two transport workers were arrested following this incident that contributed to the happening of the volatile situation at Barishal. They have called a transport strike across Barishal division disrupting communication with five districts of the division with Dhaka. Students have given thirteen hours ultimatum to withdraw their strike with the threat to continue until their demands are addressed.  On 18 February evening, the residents of Gerua village adjacent to Jahangirnar attacked the students of JU leaving fifty of them while eleven students received serious injury who has been sent to Enam Medical College, Savar.

In response to any incident, the university students usually resort to vandalizing the cars and transports and blocking the movement of vehicles adjacent to their campus.  When highways get blocked for twenty to twenty-five minutes uncontrollable traffic jam develops there because of halting thousands of vehicles at the cost of children, women’s and other passenger’s untold sufferings. However, it bothers neither the students nor the authorities concerned. The principal victims become those who don’t have any connection with it.

Not only students but also other professionals take almost similar steps to press home their demands. It has become a part of our culture to draw the attention of the authorities concerned and the policymakers. Here the questions of responsibility and humanity get the most negligible point. It does not have a connection with education, it seems! Should transport workers lag in this race? They are the commanders of the roads, highways, and transports who can make people hostage whenever they desire as they are guided by powerful leaders. Those who run the country don’t bother so much with this affair as they don’t have to face any problems directly.

Islami University was first established at Gazipur. However, it was shifted to Kushtia because students may block the road connecting the north Bengal, Mymensingh, Netrokona, Jamalpur and Tangail, and Dhaka. Any negligible reason might cause this blockade.  The then Prime Minister under the Ershad government Kazi Zafar Ahmed explained it thus’ ‘students of Jahangirnar University halt the traffic for some reasons, the same thing will be done by the students of Islamic University. So, let it shift to Kushita.’ And accordingly, the furniture of the university was shifted at dead of night and existing students were also transferred there. The ex-VC of Jahangirnagar University and later education advisor to Prime Minister Sheikh Hasina, prof. Alauddin told us that ‘universities are civil cantonments.’ The inmates of these cantonments when going out it creates a volatile situation similarly when the inmates of cantonment come out’.

The conflict, clash, bickering, fighting, chase, and counter-chase have become a common affair between the pupils of universities and transport workers and the local people.  Barishal and Jahangirnagar incidents don’t prove uncommon or different. And it goes beyond the control of any university authorities. If university authorities have to remain busy with resolving such kinds of conflicts, they have very little time to dedicate to quality teaching and research. The authorities have already spent much time to cool down and satisfy the student wing of any government that dominates the campus.

The authorities have to compromise many legal and even illegal things with them as they show their muscle power over the common students and the small student’s wings and even upon the teachers. To deal with these affairs to maintain peace and calmness on the campus, there lies a post titled ‘proctor’ who is an insecure teacher as he does not have any logistics to deal with these complex matters. Against these practical reasons, we proposed that ‘campus police’ with higher skill and particularly trained and educated individuals will constitute campus police to maintain peace and order in the campuses both in universities and university colleges. They will remain on the campus not to police the students and campus but to help the university administration to run the universities peacefully. It has been a cry in the wilderness as the state turns a deaf ear to the proposal.

We see that the proctor of JU said, “a problem developed following the altercation over cricket tournament between the locals and pupils of JU. The locals swooped on the students injuring some students seriously and many of them have been detained in the mess by the locals. The situation is dangerous.” The VC said, “Our proctor and security men cannot do anything beyond the campus. I have been ringing different places including Dhaka to send police.” These examples certainly call for the necessity of forming a special police force to maintain law and order inside and outside the university campuses. To address any emergency or volatile situation the VCs need to request the adjacent police stations/ authorities to send police that take time to respond to the volatile situation. Moreover, to deal with the students and teachers who constitute the educated and most conscious section of the society a different kind of force is necessary.  The ordinary police do not have any training or skills to deal with them

Universities are said to have been ‘autonomous’ but the sign of autonomy seems to be very weak or absent here and we cannot hold one or two individuals or entities responsible for that. However, crucial student and teacher politics stand as a big cause. The authorities are seen to wait for the decisions of the government. Jahangirnagar University students have come under the serious attack of the local people and principally the students staying at the mess houses adjacent to the university backside. These students want to get into their dormitories. But the authorities show their inability to do that. Finally, students have forcibly broken the lock open and have taken shelter in the university dormitories.

Addressing this incident even the university authorities cannot address it single-handedly. The fact lies here, the moral power of enjoying the autonomy of the university they have lost many years back as they get selected and occupy the chairs sealed as administration by doing politics. They don’t occupy the chairs through transparent means and so they necessarily remain morally weak. With a very strange look we see most of the internal conflicts and even any honest and genuine reasons common students raise, university authorities use the muscle men of the government student wing.

However, the current volatile situation appearing at Barishal and Jahangirnar looks different and the authorities cannot apply this technique that they very craftily do in other circumstances. Now, let us wait and see how they tackle these knots. Students have already occupied the halls and some other university students have given an ultimatum to the authorities to open the residential halls, whereas the government has declared to open the halls on 17 May and classes will resume on 24 May of this year. Finally, students had to vacate the halls they were forced to open. By this the government has declared to open schools and colleges on 30 March and universities will have to wait for another two months more. Let us wait to see the future of higher education in our country.