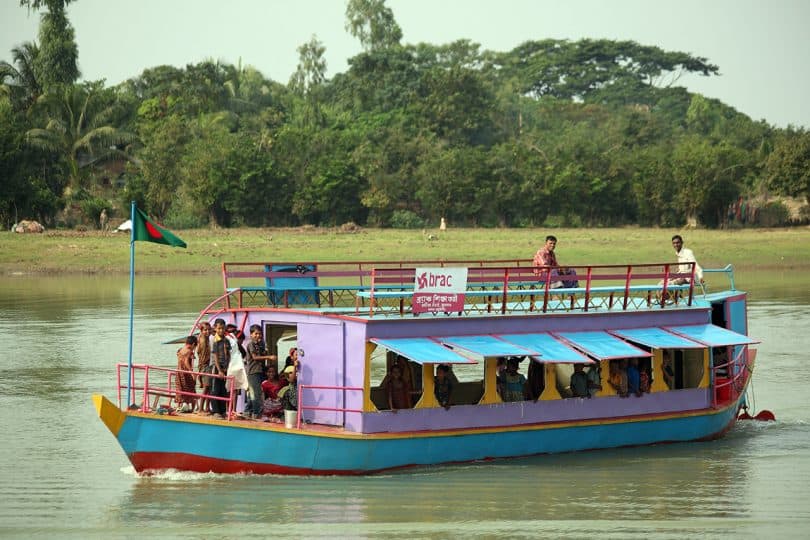 When a student of English literature visits greater Sylhet particularly Sunamgonj he/she will remember the famous lines of S.T Coleridge, the romantic poet ‘Water, water everywhere, but there is not a drop to drink.” He /she can change it a little bit thus’ water, water everywhere, no land in sight or water, water everywhere, no school in sight.” We know Sylhet is called the land of haors or permanent marshland covering 30.2 per cent of its land. Despite the adverse conditions and isolation, people have managed to live in the haors of Sylhet for hundreds of years. Their fighting with nature has given them the courage to adjust to the roughness of natural phenomena which have become part of their lives.

But the world has seen quite change in the ways of living, earning, education which has very negligible or no effect on this haor or marshlands of Sunamgonj. Of course, the poets or lovers of nature can soothe their eyes by visiting these areas just for a retreat or sojourn. Permanent living keeping them aloof from the world which we call civilized (?) will not allow our minds and strength. Still ‘homo sapiens’ have lived here for long on the lap of nature surrounded by water. The light of education and modernity hardly touches them. We the plain land people, the fortunate people and the state definitely have some responsibilities towards them.  Generally and traditionally in rural Bangladesh boys are the first ones to be sent to school and girls can go to school only if the facility is not too far from home. Often, the nearest school is miles away and for girls, this can represent an insurmountable challenge to their schooling. The picture of schooling in haor areas prove extremely miserable. Standing beside the education deprived populace has come under the thought of BRAC Education as it promises to extend education facilities to those who have no option for schooling.

Traditionally the natural location of the Sunamgonj haor area people doesn’t send their children to school. They don’t even think of sending them to school in this age of computer and internet whereas we have promised a lot to the nation. They deserve the light of education and it is our duty to reach it to the haor children. From BRAC’s commitment to the outreach population, it started a campaign and searched for every possible means and ways and talked to the local boat making people and made them know that BRAC was going to make arrangements of primary education for the haor children.

People from all walks of life started welcoming this initiative. In one research it is seen that in greater Sylhet children start going to school at the age of six and their percentage is 52. In plain land this rate is 50, in haor area, it is 60 and in tea estate areas it is 73. To make the dream of giving education to the deprived children of haor areas into reality BRAC Education Program launched a boat schooling program at Sunamgjon district. On 26th September 2011, a new chapter has opened in the history of the education of the haor people. BRAC Education Program started schools on boats in two villages namely Dhorerpar and Rahamatpur on that day. Each boat will pick teachers and 30 registered students from nearer ‘ hati’. After finishing class they will be dropped in their home.

They consider this as an excellent opportunity of becoming familiar with the letters and alphabets. At the launching event Dr. Mahbub Hossain, the Executive Director of BRAC said, “ BRAC works to support the government. Our values are reflected in our work.” According to research statistics, it is seen that  42 per cent of the villages in Sylhet have no primary schools. In terms of literacy rate also lags far behind the national average. The literacy rate for 7 plus populations is 40.7 per cent and for the adult population, it is 44.4 per cent but national rates are 48.5 per cent and 52.1 per cent respectively.

The Executive Director of BRAC, Dr. Mahbub Hossain, Director- BRAC Education Program, Dr. Safiqul Islam and the Deputy Commissioner of Sunamgonj-Muhammad Yasin Chowdhury were present in the boat schooling launching ceremony to give encouragement to the villagers and children. It also sets an example of GO and NGO cooperation.  Now, this boat schooling opportunity is extended to ten villages such as Rahamatpur, Bagani and Aktapara of Jamalgonj Upazila, Dhararpar, Dharerpar of Bishamvar upazila, Bhatital of Dirai Upazila, Raghunathpur of Shalla, Rameshorpur, Jagadishpur and Gazipur of Sonakani and Tahirpur Upazila. Total ten boats will hold a schooling program for three hundred children. It exists as an example for others to extend hands to bring the deprived children of the haor people under schooling program. The government can make such kind of arrangements for the haor people as well as for the children who cannot go to school due to flood in many parts of Bangladesh as the frequent flood is a common natural phenomenon here. Normal schooling gets hampered every year in several parts of Bangladesh but no tangible arrangement has yet been done except to yield to the whims of nature and accept non-schooling during the flood.

It deserves relevance to mention here that in BRAC primary schools 1.2 million students are currently enrolled. It is more encouraging that most of them are female students who usually get the second priority from their parents to go to school. The presence of BRAC primary schools in their vicinity has changed this notion of the parents proving their old and superstitious ideas.  So far almost 5 million children have graduated and received basic education from these BRAC Primary Schools, while nearly 95 per cent continue to secondary schools and they show far better performance in terms of presence in the class, cultural aspects, participation in educational activities and academic results.  Introducing boat schooling has opened new vistas for BRAC Education Program and it cherishes to borrow all-out cooperation from all concerned to make it a successful and sustainable project.