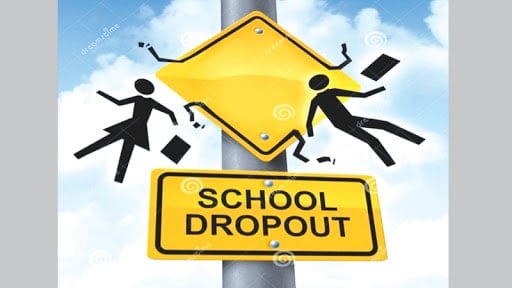 Access to primary education has touched nearly a hundred percent, and gender equity in primary and secondary has also been ensured. However, we still lag in providing quality education to the learners that must be the prime focus of the government today. The picture of dropout both in the primary and secondary has been moving in the same circle for five years together with the fact of dropping out more girls than boys in both the tiers.

Another picture says about four lac students who registered in class nine, just two years back, stand in the threat of dropout. SSC and equivalent examination started from February 03 and 20 lac 73 thousand 988 students registered in class nine but 16 lac 81 thousand 688 students filled in the form to sit for examination meaning 3 lac 92 thousand students have been missing and the statistics show that one student in every five has dropped out that must talk about a grave concern.

Secondary level proves to be the most vulnerable and weak among three levels of education, such as primary, secondary, and higher secondary. Despite taking several steps, the largest number of students dropout in this tier, and girls’ dropout proves higher than boys in these three levels. In the primary and secondary tiers of education stipend, scholarship and distribution of books free of cost appear as appreciable steps. In 2013 twenty-six thousand non-government primary schools have been nationalized. In 2019 seven hundred and 30 secondary level institutions have been brought under MPO.

The dropout rate in the number

20 lac 47 thousand 779 students sat for the SSC, and equivalent examination in 2020 and these students were PSC examinees in 2014 whose number was 30 lac 94 thousand 265. According to that account, 10 lac, 46 thousand students have been missing. In other words, from class six to ten, 10 lac 46 thousand students dropped out in five years.

What do the authorities say?

In this regard, the Primary and Mass Education Secretary says, “The rate of dropout does not decrease after reaching out a particular stage. Those who cannot achieve education get dropout out. That means, if we can ensure quality education, this rate will decrease. This is why we have emphasized reading, writing and mathematics Olympiad. We are trying to bring pleasure to the teaching-learning situation. But the significant cause of dropout is poverty.

Again, students, when migrate to towns and cities with their parents, don’t go to schools. We are going to introduce the midday meal in all the schools.” We know today men are well-to-do financially, and the children of these families receive education mostly from the privately run institutions such as kindergartens as the government primary schools offer a poor show in terms of accountability and sincerity of teachers even though their salary comes from the state. Students just pass out of these schools without achieving the desired competencies.

Most secondary level schools enjoy MPO status, but the teachers’ quality still evokes a big question. The curriculum has been made difficult to understand. The creative question has become another burden for both students and teachers. In this lifeless teaching-learning situation, real learning does not take place in the classrooms, rather giving homework dominates the institutional learning instead of taking place real and enjoyable teaching and learning.

It is amply proved when we see the middle class, lower-middle and upper-middle-class students entirely depend on notes, guides, helping books and coaching centers rather than classroom teaching. Students get enrolled in educational institutions just to have a certificate from education boards. When this is the case, what’s the contribution of institutional teaching?

National Education Policy Member Kazir Faruqe Ahmed says, “The principal cause of girls’ dropout is child marriage and lack of social insecurity. To say it in detail, educational expenses and lack of life skills-based education are the causes of dropout. Children indeed get books from the government, but what about other expenditures such as coaching, buying guide books?”

DG DSHE has said, “We have been trying to bring about a big change in the field of education. We want to make education life skills-based, and diverse measures have been taken. The big change is coming in the curriculum. Moreover, technical education has been introduced at the secondary level that may ensure that students will earn their living, leading to improving dropout situations.” But it seems a long time effort, the immediate solution to dropout may not be found.

Dropout in the examination

Those who did not appear in the examinations even though they got registered remain vulnerable to dropout. Very few of them will sit for examination next year, but a big chunk will dropout. Lack of consciousness, child marriage, poverty, river erosion, separation from the families and migration are the prime causes of such kind of absence and dropout. Still, it calls for genuine research, but who bothers about it?

Many school authorities have said that only seventy percent of students sit for examinations among those who register in class nine, and this situation goes common with 90 percent institutions except some better ones that never talk about the whole story of the country. Some institutions don’t send the children to attend public examinations even if they show a little bit of low performance in the test examinations.

They adopt this process just to show good results in the public examinations and earn fame of the institution. This is another cause of dropout, and probably none gives importance to this fact taking it as a universal phenomenon before sending students to sit for public examination. Should we give our due attention to these facts?