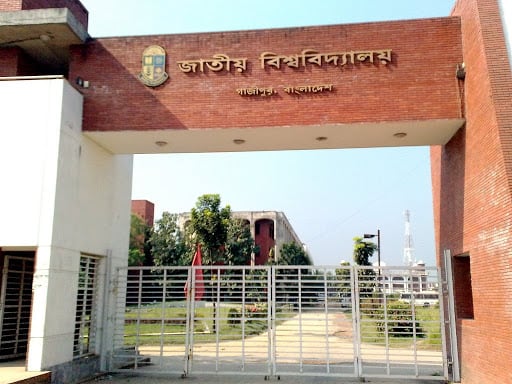 A series of irregularities of the National University of Bangladesh appeared in a Bengali daily (Jugantor  April 19 to 23) drawing the attention of the people working for education. NU was established in 1992 to ease the burden of public universities and run smoothly the functions of education in the tertiary level run through the university colleges. But with the passage of time, the heap of burden and problems have grasped the university making us frustrated. No effective measures have so far been taken though the situation is getting worse day by day.

Session jam has paralyzed National University as traffic jam paralyses the lives of Dhaka city dwellers and hijacks much of their valuable time every day exerting its negative effect on national life. Lack of inter-departmental coordination stands as a significant factor of its session jam. the university now experiences three years of gridlock or session jam. Students are to spend seven years to complete their four years’ course. The university does not see and monitor how classes are going on, who and how the teachers conduct classes, whether they are to the point or not, whether students can come out of the circle of student life after a certain period of time. To remove the burden of taking exams, examining the scripts and publishing the results on time of the public universities, NU was given the responsibility. After two decades it seems the situation stands in the same place as it had been. It takes one year to publish the results of the Master’s examination. It is one of the main causes of session jam along with other causes.

The administration of the university is corrupt from head to foot in terms of sincerity, honesty and financial matters. Political recruitment of officials and staff ignoring the transparent way of employing the officers, teachers and staff can be attributed to it. Administrative officials who received an appointment on the basis of political affiliations don’t have any accountability, honesty, sincerity to the development of the university. They remain busy to make their fortune by fair means or foul. They don’t bother about the rules and regulations of the university. They don’t bother about the higher administration because of their political linings. It is strange to learn that many officials don’t attend even offices regularly contributing to increasing the heap of works.

After coming to the office many just spend time like the labour leaders in the canteens, taking tea and arranging political discussions.  The Bengali daily also mentions that teachers’ salary comes from the directorate of secondary and higher education, PSC selects the cadres, teacher transfer and promotion are looked after by the education ministry itself. Non-government teachers are employed by National University. Lack of coordination among these bodies contributes to increasing the problem of NU.

In the face of serious irregularities, a fact-finding committee was formed to identify the problems and suggest some measures to address the problematic issues.  It identified that printing questions in the government press are a long process which is a contributing factor to cause session jam.  An examination cannot be taken time due to it.

The press remains busy with printing papers/ questions and various other things of different government departments and agencies. Still, no pragmatic step has been devised to address this issue through the university possesses a good amount of balance amounting to 260 crore taka of its own (Jugantor). So, we propose that the university should establish a printing press of its own immediately. It does need to depend on the Government press. It does not need to wait in the long queue to get the questions and other education materials published from the BG Press. Why no such step has yet been taken when ten lakh students belong to this university? Why didn’t the previous authorities of the university raise this question really baffles us?

National University administration has decided to establish six regional offices in six divisions to bring a motion in all the activities of the university. It is argued that the students need not go to Gazipur to address the small problems. But many say that it will not lessen the problems rather increases problems manifold and corruption will develop tentacles. In 1999 two Regional Centers were established at Chittagong and Rajshahi respectively but they did not show any efficiency. Moreover, it incurred a loss of taking fifteen lakh. Who can guarantee that the same situation will not happen to the new ones?

When I talked to the teachers some more dark pictures came out. For the session, 2010-11 honours students mark allocation has not yet been done. No sample question on writing even after the college test examination have not been sent to the colleges. This is about English honours cases. The same may be for other subjects. They also said that many examinations (HSC and degree examinations) in colleges hamper the normal classes of honours students.  Honours students hardly get due attention due to these examinations. Some new or innovative measures are needed to develop for quite a long time but the authorities hardly give attention to the fact. Teachers complained that they don’t have the training to deal with honours students, run academic administration. They need training both at home and abroad many teachers are not actually apt to teach at the honours level as they are the real teachers of intermediate and degree pass.

In many colleges, students cannot use seminar rooms though they give the fees regularly. Colleges are not buying books and National University does not take any step regarding the issue. As students cannot read the books, newspapers and journals in the seminar rooms, they loiter and use their free time fruitlessly.  This issue along with the whole academic affairs need to be monitored. No monitoring system has been developed in the NU though teachers and officials at Gazipur Campus are available to do this thing.

The presence of students in the first year honours remains nearly 60% and it comes to ten and even five per cent with their crossing of the years. In the third year and final years, the presence becomes so thin that it cannot be mentioned even.  Students remain busy with tuition, business, running coaching centres and share business leaving the classes as soon as they get admission in the honour level. It becomes easy for them to memorize some notes and pass the examinations. Authorities don’t have any headache bringing the students into the class. Teachers suggest that National University must compel the colleges to send the attendance of the honours students every three or four months duly signed by the departmental heads and principal. The university authorities must ask for a particular attendance in the class otherwise taking part in the examination will not be allowed. If it is done, students will give importance to participate in the class. They have taken the honours class just like a plaything and take a degree which gives them just a certificate, not education in the real sense of the term.

Creative teachers complain that no research at all in the National University is being conducted. No arrangement for sending them outside the country for higher education is done.  Research is the life of a university. A university is ranked on the basis of its qualitative and quantities of research. It is evaluated on how many research programs are conducted a  year. This university stands hundreds of miles apart from this notion. In case of taking examinations and viva-voce lobbing gets priority. Some particular teachers earn money neglecting the talented and good ones. They are not allowed to go out of their colleges and engage in these financially academic activities. Syllabuses are changed again and again but in the process, the teachers of NU are hardly invited. They complain who do this thing without consulting them remains unknown to them.

Can we afford to allow these anomalies to continue in the largest university-run by public money? Should we play ducks and drakes with the life and education of ten lakh students? In the ranking of universities, no university of Bangladesh or SAARC countries occupy any place within 10th  or even 100th position. But the number of students of National University far outnumbers many universities of the world. It has ten lakh students in more than two thousand colleges. Really quite a big number of students! In no way they deserve to face any negligence or irregularities from the authorities concerned. At any rate, this big national educational institution must be made a real centre for teaching and learning, conducting research and producing quality students so that they can face the challenges of the 21st century without being the burden of the already unemployment plagued country.