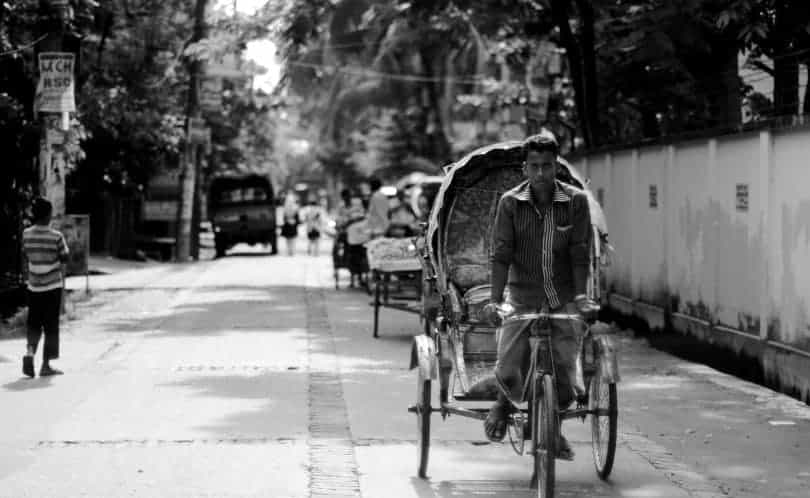 On Saturday the last page of Prothom Alo has brought out a feature on how a rickshaw puller runs a hospital and school. It received my reading with tearing rolling down my checks continuously till I finished reading it. I feel constrained to let the message know the world. It’s the story of a nobleman., Joynal, is a 60-year-old rickshaw puller in the streets of Dhaka and possesses a  greater heart that goes unnoticed and unknown and to the metropolitan city dwellers. He is simply a rickshaw puller to the metropolitan snobs, opportunists, and masked gentlemen but he is a great man in our eyes.

They don’t know how great a man this city witness as a rickshaw puller and what a great idea he nurtures in his bosom.  Who knows that the hardest earn money of Joynal is spent for the poorest segment of people for their treatment in a small hospital established by the money he earns peddling rickshaws. Dear readers, please imagine what a great heart lives in his bosom!. The hospital contains six beds,  a village doctor,  and sees once a week a doctor from a government hospital which he manages. He gives salary to the village doctor and gives medicine to the patients free of cost. He buys medicine with his hard-earned money.

Not only that Joyanl runs a primary school having 120 students and he defrays all the educational expenses of the students and gives books free of cost but no government book they enjoy. He collects old books from different schools and buys some with his own money which he earns paddling rickshaws. The school sits at 10:00 a.m. Before that, it runs a ‘Maktab’ to teach Arabic to the village children. Tanhasadia village of Parangonj Union under Mymensing Sadar has been proud of having such a man of the broadest heart. Dear readers can you imagine what a great heart does Mr. Joyanl possesses! Doesn’t he deserve a salute from us?

This mundane and complicated world shapes us just to remain busy with our own thoughts and interest, gain personal ends and think of our future but Joynal who didn’t embrace the opportunity to receive institutional education. The higher educated individuals who receive higher degrees from state-run institutions and what they return to the nation? We fail to compare this unknown man with the so-called educated, higher educated, so-called public leaders and social workers. Many of us possess palatial houses in the city but heart suffers from poverty. They hardly think of doing anything for the ailing humanity. They rather try to steal the wealth of the poor by a stroke of the pen. They take pleasure to give pain to the poor. Even, the people who have been engaged by the state to give service to the countrymen just seek foul means to trap the illiterate and common people and extract monetary gains utilizing all sorts of unfair means. Higher education has failed to teach them any humanity. But Joynal had no institutional education but serious concern and dedicated commitments to the nation, to humanity, and to the neglected segment.  I want to say he is simply a great man whom we don’t know.

The so-called developed and civilized society doesn’t know him and doesn’t know how to honor him. How he has nurtured the hope of establishing a hospital and giving free medicine to the poor villagers and engaging there his wife, daughter-in-law, grandfather simply makes us ashamed.  What is our commitment to the nation and what we are doing? He earns 500-700 taka per day pulling rickshaws at the age of sixty.  He, the rickshaw puller, pulls rickshaws three or four days a week and spends most of the money buying medicine for his hospital. He goes to his village, remains there for two or three days, and again comes to Dhaka to earn for running the hospital and school.  As he does not have any other skill to earn money, he has materialized his dream and given the shape of his nurturing hope to dedicate himself to the real welfare of the real poor by peddling rickshaws. How great he is! This heartless Dhaka city and the thankless society cannot measure how unfathomable his nobleness and broadness of heart is!  May I request the Director of BRAC Health Program to extend our health facilities to Mamtaz Hospital and give encouragement to Joynal?

His father died without treatment and medicine which taught him to do something for the poor. Extreme poverty did not give him an opportunity to be familiar with alphabets and words but the heart he has developed cannot be measured by the traditional values of the society where everybody is vying for material gain and individual publicity. He is the most literate; he is the most enlightened person in society.  A small two-shed house is his school and Maktab. In the morning children of the village learn Arabic and from 10:00 am the school starts. The school is from grade one to three. Ayub Ali, an SSC passed young man is the teacher of that school. Out of 120 students, 70 of them are girls.

This illiterate Joybnal highly evaluates girls’ education which the world leaders think and started giving priority above many things. I request the Director of the BRAC Education Program to see whether we can do something for this great and noble-hearted Joynal. He contributes tremendously to the education of the country, maybe, on a small scale but the effort, dedication, genuineness’ and sincerity he has employed cannot be fathomed by traditional tools measurement. Students have given free books and education materials which he collects from other schools. How innovative his ideas are! After passing, class three students get enrolled in Sirta-Naya Para government school and Foliamary Registered Primary School. This noble and high-level thought of Joynal matches with the Education Program of BRAC which thinks of the education of the vulnerable section along with other interventions to stand beside the poor and helpless.

Poor Joynal, a rickshaw puller, is originally the richest person as he harbors a broader heart. His broad smile says so. This is his greatest satisfaction that his honest labor and toil go for the welfare of ailing people. I salute you Joybal thousand times.

Joynal toiled twenty years in the city and opened a DPS account to fulfill his dream but he was neglected and criticized by the bank managers. However, one manager of Sonali  Bank gave a value of his dream and concern. She helped him open two DPS accounts which produced him one lac eighty-four thousand taka. He came back to his village with that money and bought a small piece of land for 40 thousand taka and established a 25 feet long tin-shed house for the hospital. Even the village people criticized him to learn his plan.  Now 25-30 patients come to his hospital every day. One room is for sitting the patients and doctor, another room for distributing medicine, and another room accommodates six beds.  Mohammad Ali, the doctor gets Tk 1500 per month. Patients come to the hospital with fever, diarrhea, cold, cough, stomach pain, pregnancy problem, injury. His wife helps giving birth to a normal child in the hospital as she has got some lessons working in a hospital in Dhaka.  Every Thursday Hefzul Bari, chest physician of Mymensingh Sadar Hospital comes here. The hospital is named after his daughter Mamtaz. His granddaughter Alpana writes the description of the disease, his son’s wife Tamanna distributes medicine. Joynal himself talks to the patients personally whenever he gets time.

After the publication of the report, many readers and individuals, and organizations have already responded to extend their help and cooperation to Joyanl for his noble endeavor. By the active and prompt initiative of Prothom Alo, trust has already been opened named ‘ Prothom Alo/ Mamtaz Hosptial ‘ Account number 2071007959. Thanks to Prothom Alo. You have done the genuine service of media. Who bothers about the poor actually? Everybody is ready to add more oil to the already oily head. I request Hanif  Sanket to bring Joynal to his popular magazine ‘ Ittadi’ and make him acquainted with the world. The national and international organizations dedicated to the service of poor humanity are entreated to stand beside this great man. We believe the noble and sincere endeavor of Joynal will not perish. Definitely, God will stand beside him to materialize his dream to give us a lesson.  Again I salute Joynal. Go on.