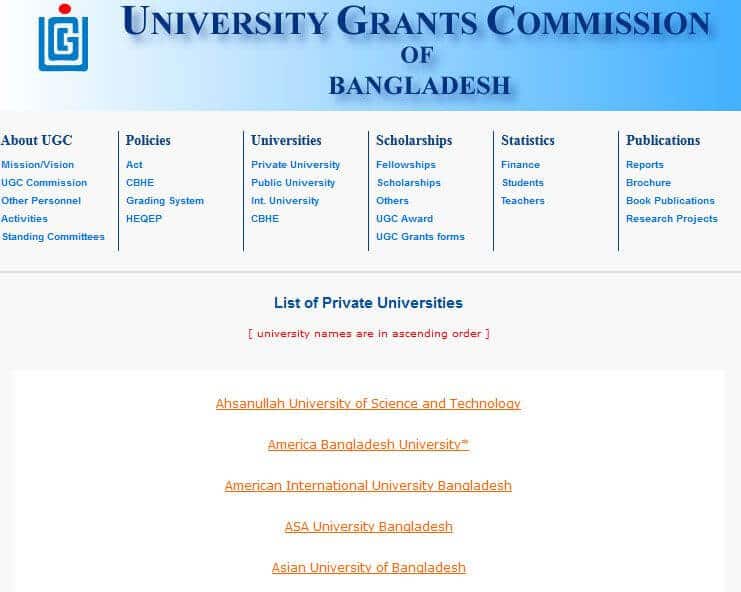 A very recent report regarding the education of private universities was released in the Parliamentary Standing Committee on education ministry meeting which has baffled us. It directly said that certificate trade and irregularities are rampant in private universities. Even the government has failed to control it in spite of taking some measures. Both the ministry of education and the University Grants Commission has expressed their inability and helplessness to take any punitive action against the unruly universities.

It has further made us worried. But private universities are doing certificate business cannot be termed on mass as private universities contribute a great deal to imparting higher education in Bangladesh which in some cases prove far better than our public universities though they have the big and rich infrastructure.

Darul Ihsan University, Ibais University of Dhanmondi and Prime University of Mirpur are mostly problem-ridden as the report says. Some 18 private universities lodged cases against UGC and the education ministry. Some 17 universities could establish their own campuses in five years of their establishment. Only the Ahsanullah University of Science and Technology has fulfilled all conditions and received the permanent certificate from the government under the Private University Law-2010.

The government earlier halted all activities of Queens University and America Bangladesh University on the ground of gross irregularities. However, the varsities are operating their regular business by obtaining stay orders from the court on the government’s ban. It clearly shows a loophole in the system and weakness of the law regarding the controlling of private universities. Another fact lies here which is not less important. Private universities do not take any subsidy or financial help from the government; necessarily they have the reason to show reluctance to follow all the rules and regulations imposed by UGC. So, rules and regulations to run the private universities must be up to date, timely and proper and judicious.

Many private universities are rendering below-standard teaching to the students. This identification of UGC deserves thanks. The next question comes from what UGC has done to improve the quality. Just identifying a problem and letting it know the people is not enough. Taking pragmatic steps is a must. Many private varsities are also said to be involved in financial irregularities, who are also withdrawing money from the FDR illegally. There are shortages of the required number of teachers in proportionate to students in some private universities, adding that many teachers also lack experience and efficiency.

UGC actually has many things to do here. Even public universities employ teachers absolutely on political grounds and party identification, private universities which go under less control of the government take the opportunity to do that on the financial ground but UGC should be strict in this affair which will be supported by the guardians, students and all concerned. When UGC just talks about establishing permanent campuses people listen to it with less importance as it is a very difficult task. Rooms lie here to bring about changes which should be time keeping pace with the scarcity of land.

With a view to controlling the private varsities, a proposal has been submitted to the government to enhance the capacity of the UGC, establishing UGC’s branches at the district level, operating mobile courts for shutting down unauthorized campuses and giving the power of executive magistrates to education ministry officials for dealing with irregularities in the private-sector educational institutions. These are good suggestions undoubtedly. What about public universities’ irregularities?

Darul Ihsan University started its operation in line with the Private University Act 1992 section 4 to establish its own campus on five acres of land within five years of starting its operation, but could not fulfil the terms and conditions. Moreover, the university trust split into pieces, established many outer campuses across the country and doing business in the name of education. The university has failed to maintain the quality of education and is involved in selling higher degree certificates. Media reports have said that the university has established 55 illegal campuses across the country. However, Vice-Chancellor of Darul Ihsan University said, “Why would we take the responsibility of someone who’s using our name?” Repeatedly we hear about the irregularities in appointing VCs in public universities but we hardly hear anything about it from UGC.

We have 35 public universities with ideal campuses having almost all sorts of amenities, library facilities, and qualified teaching staff. However, the universities are plagued with nasty student politics and low-quality teaching. Here qualified teachers try to take classes in private universities and many of them are involved in teacher politics either to save themselves from the wrath of student leaders or to gain some lucrative positions. They have stopped thinking of providing quality and 21st-century suitable education to the pupils. The number of seats in these universities is not being increased according to the pressure of students in the country.

Only law and police action cannot close down the business of some private universities. Many private universities have been given permission absolutely on political grounds. To gain some immediate benefits, political people gained permission which later becomes a huge burden. Our policymakers never want to understand its evil consequences. Our government must give serious thought to increase the number of seats in public universities, ensure a sound and congenial atmosphere there reining cadres and leaders and impart high-quality education. These measures will, directly and indirectly, teach the private universities to ensure quality and follow rules and regulations.