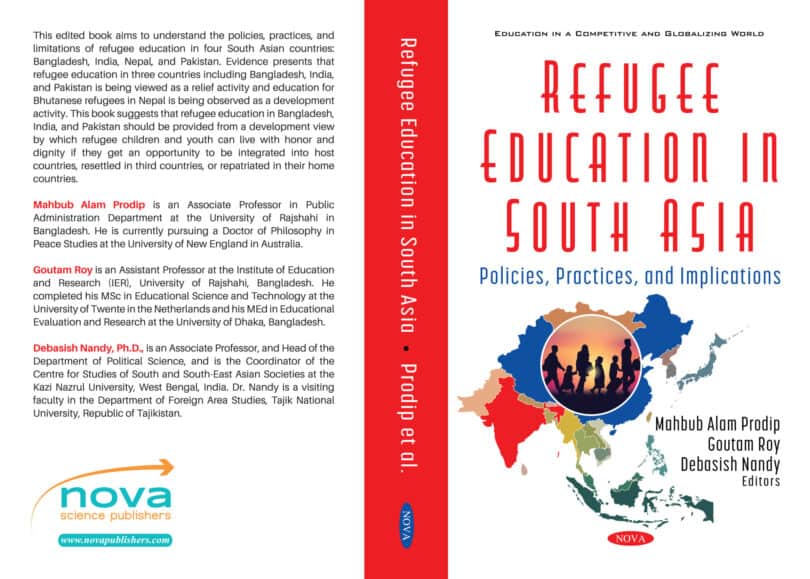 Refugee Education in South Asia: Policies, Practices, and Implications stands in the form of an anthology of nine research papers that tends to unfold the education situation of refugee children in South Asia edited by Mahbub Alam Prodip, Goutam Roy and Debasish Nandy and a brief comparative study of global education management for refugee children also appears here.

Half of the world’s refugees are children who are of school age, but more than half of them don’t receive any education, as UNICEF says. It reflects the policies and practices of refugee education of Bangladesh, India, Pakistan and Nepal that must be very much relevant to the current context of the globe in general and Bangladesh in particular.

The book presents a variety of case studies analyzing policies and practices for refugee education for youth and children who live in camps or temporary settlements scattered throughout receiving countries: Bangladesh, Pakistan, India and Nepal, who accommodate these hapless humans. The world experiences a high influx of refugees due to war and conflict, and at least 100 million people have left their homes to seek refuge either within or outside the border of their homelands, making naked the hollow civilization we take pride in.

UNCHR reported in June 2020 that 79.5 million people had been forcibly displaced worldwide due to violence, conflict, persecution and the violation of human rights. Forty per cent of children below the age of 18 constitute a forcibly displaced population in the world whose enrollment in primary education is 77 per cent, but in the secondary, it sees a drastically changed figure, which is 31 per cent and in higher education, it registers extremely poor with 3 per cent only.

These alarming facts and figures may sensitize the policymakers of the globe and the entire conscious community as they cannot afford to deny the dangerous implications of refugee children and people.  The majority of host countries in South Asia have imposed restrictions on refugees’ physical movement, restricting their access to employment and education simultaneously. However, these refugee receiving countries provide education to refugee children on humanitarian perspectives though it is the basic right of these children.

If children are subjected to humiliating physical abuse or punishment, the optimum development for children cannot be acquired. Chapter five tells that though India does not have any particular policy to deal with refugees, she provides some education to refugee children from a humanitarian perspective with the assistance of some NGOs and UN agencies.

Chapter six focuses on some underlying causes that hinder Afghan refugees in receiving education in Pakistan and India. The researchers argue that both India and Pakistan have been facing many challenges in the process of securing the right to education of Afghan refugees. Some common problems including lack of financial resources, lack of security, lack of availability of transport, lack of access to quality education, physiological disorders, dependence on UNHCHR and NGOs.

Chapter nine summarizes the findings of the previous eight chapters keeping pace with the conceptual framework provided in the introductory chapter. In this concluding chapter, the authors highlight the barriers and challenges of refugee education in South Asian countries on the basis of case studies.  In order to improve the situation of refugee education for children and youth, they have put forward relevant recommendations for state policymakers. They also emphasized the necessity of establishing collaboration between the respective governments and non-governmental organizations to bring about a tangible solution to refugee children’s education.

Since 1978 around 1.2 million Rohingya from Myanmar have fled to Bangladesh as refugees. The most recent influx of 2017 has resulted in nearly 742000 Rohingya reaching Bangladesh. Currently, around 912000 Rohingya live in two registered refugee camps and the makeshift settlements around Cox’s Bazar. In the Rohingya refugee community, about 683000 are children, and some NGOs give them religious education with two outcomes—religious education gives Islamic knowledge and discipline and creating job opportunities for Rohingya refugee children in future.

In recent years 280000 children aged 4 to 14 are getting emergency education provided by the overall education sectors of refugee education in Cox’s Bazar, whereas an estimated 97 per cent of youth and adolescents in the age group 15-18 do not receive any type of formal learning. (UNICEF 2019). The book gives us an insight into a brief history of the marginalization of Rohingya refugees in Myanmar. The Rakhine-Rohingya conflict started in World War II. The Rohingya took part alongside the British in WWII while the Buddhist people took the side of the axis power Japan.

Following this decision, with the help of Thakin’s party, the ultranationalist Buddhist of Myanmar imposed severe communal violence on Rohingyas. Japan took control of Akyab on 23 March 1942, and many British soldiers, Karen and others had died by bombing the Japan Air Force. The British soldiers fled away on seeing the Japanese entering Burma. As a consequence, the local Buddhists and the Burmese Independent Army created communal attacks on the Rohingyas that killed about 100000 Rohingyas.

When the government denied the citizenship of Rohingya people, many governments public schools in Rakhine witnessed closure shutting the door of education for Rohingya children. They had only option to go to Madrasa for education which could not equip them to face the challenges they embrace.  Myanmar schools teach children five pillars of the country such as farmers, workers, students, monks and the military. Ninety per cent of Myanmar people are Buddhist while only 3.9percent are Muslims who have 1200 mosques in Rakhine out of 2500 mosques in Myanmar. Myanmar Government is trying to cut the number of mosques and Madrasa and take control of Islamic education.

The government of Bangladesh has allowed Rohingya refugee children to have access to primary and kindergarten schooling in two registered camps since 1997. Secondary level education was also initiated after 2007, and Rohingya children were allowed to enrol at grade seven. Overall, 21 primary schools and two secondary schools were established in two registered camps: 11 in Nayapara and 10 in Kutupalong. The government permitted INGOs and NGOs to use ‘Minimum Standards for Education in Emergencies’ to provide emergency education to Rohingya refugee children in the camps and makeshift settlements.

The primary emphasis of this emergency education is to offer basic literacy and numeracy for the age group of 5- 14 years as well as to give psycho-social and recreational support. Emergency education is of three types such as early learning for (5-6) years children, basic learning for (7-10) age group and life skill learning for 11-14 years old group. UNHCR   promises the expansion of educational opportunities for the Rohingya refugee children as the Bangladesh Government took a landmark decision in 2020.

The government does not give any support for running madrasa education, but children get biscuits, rice, meat, bag, pencil, writing pens, and pencils while going to emergency education centres. Emergency Education Centers offer child-friendly spaces which help to reduce traumatized behaviour of refugee children in the camps. And really refugee children visit learning centres mainly for enjoyment and pleasure, not for learning. The opposite picture prevails in madrasas as these are not child-friendly for refuge children. These spaces do not have an option for children to enjoy, such as playing, dancing and singing songs.

As a result, those refugee children who have attended religious education are still traumatized. Sometimes, they become violent with their friends and classrooms. This seriously discourages the donors as well as the host country to expand madrasa education for Rohingya children.

Over 70.8 million people from over 134 countries have seen coercive displacement from their countries of origin, and 41.3million people are forcibly displaced from their homes by civil or interstate war. Around 25.9 million are refugees, and 3.9 million are stateless worldwide. Bangladesh badly experiences the hosting of a considerable number of such refugees coming from Myanmar, but she also sees stranded Pakistani people mostly known as Bihari.

Currently, an estimated 400000 Bihari refugees are living in 116 different camps in 13 districts in Bangladesh. Dhaka district alone hosts 100000 Biharies in 45 settlements, among which Geneva Camp is the biggest. Among these Bihari refugees, children and women are the most vulnerable people in the camps.

The book draws the conclusion by suggesting to uphold refugee children’s survival with honour and dignity, and that can be achieved only when host countries manage proper education for them considering it as their human rights, and non-governmental and global cooperation is a must to achieve it. The rightful and durable solution to repatriating these children in their home countries, or at least they can be integrated into host countries, if possible. This book contains ample food for thought for the policymakers of states concerned and the global leaders who control the key of this sensible and humanitarian issue in this globe that we want to call ‘civilized’!