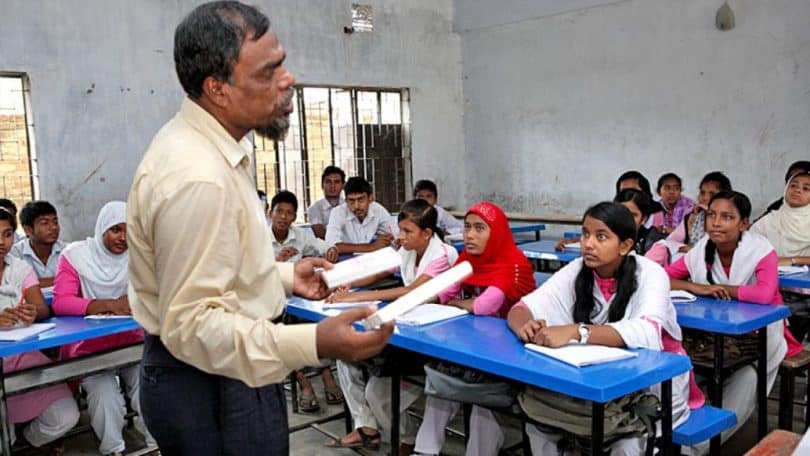 It is true that the education sector has received significant importance from the government under the able guidance of Nurul Islam Nahid, the minister for education. Still many flows have been discerned in this sector which tends to threaten the smooth running of this field. Several alarming figures in the secondary level education of the country appeared in different English and Bengali dailies leading me to put my comments on the issue.  The shortage of teachers, assistant headmasters, headmasters and education administrative posts registers significant flaws in the secondary education sector of the country.

The Secretary-General of Assistant Teachers’ Association, Mujibur Rahman said, “Teachers are under immense pressure as they have to take double classes in the schools where the double shift has been introduced.”  He also said that many posts of headmasters have been served by assistant teachers and many administrative posts have been remaining vacant for a long. There are 172 administrative posts at the secondary education administration of those 126 are lying vacant. Without any doubt, these figures show us that a horrible situation this sector at present experiences which we expect to address immediately in the greater interest of the nation. A more horrible picture goes when we learn that there are nine regional offices of secondary education in the country and only five of those have deputy directors. The five deputy directors are appointed on deputation. There is no officer in 18 posts of inspectors of schools while other 18 posts of assistant inspectors of schools are also lying vacant.

But the secondary level education contexts may not be well known to them. The people in the secondary level are quite aware of the problems, difficulties and addressing ways. If they can occupy the administrative positions, the secondary education field will see quick movement here.  In that case, competent and potential teachers must be selected and if necessary, they can be sent abroad for higher-level training. The government has been doing a lot but taking bribes and corruption in the Directorate of Secondary and Higher Education have been going on as usual. Teachers are to face a fish out of water situation whenever they come to DG for getting any kind of work done.

No MPO is possible without giving bribes. When this anomaly reigns in the DG office at Abdul Gani road, what is the necessity of appointing DGs, Director and other administration officials from the college? The question also arises when the headteachers will be appointed to these posts will the DG office get rid of bribes and corruption? These positions must be based on absolutely merit and performance. Political consideration must not give any priority to the greater interest of the nation. It is well known to us what the students do in the university or college campus who are involved in politics. When these people are seated on a responsible chair, they cannot think of anything else other than doing party politics which leads this sector to ruination.

Currently, 2250 posts of assistant teachers are lying vacant.  The process of recruiting 1968 teachers against the vacant posts is going on. In spite of the recruitment, 250 more posts will remain vacant.  DSHE sources said that post of assistant headmasters are 446. The number has been increased to 528 as the double shift has been introduced in 82 schools across the country.  When government secondary schools witness this pitiable situation, how unfathomable the gravity of this situation is in the non-government secondary schools can just be imagined. So, the government has no room to be complacent at all. The government has to go thousands of miles if we really want to build future leaders and worthy citizens in the country.

A piece of good news in the newspaper also drew my attention. It says that the government is going to establish 10 new educational institutions in the city of Dhaka in a bid to ease the burden of admission pressure. Five secondary and another five higher secondary educational institutions are going to be established at the cost of  Tk 435 crore. The construction work will be completed by 2014. In the first week of March, the first school will be started at Hazaribag, Kalunagar.

According to the population in the city of Dhaka, the number of quality educational institutions proves extremely scant. The private sectors are vying to establish more educational institutions mostly with commercial aspects ignoring quality. Serious government intervention in this field is greatly expected. Engaging quality teachers, ensuring quality education, saluting commercialization of education and training and research of teachers must be given topmost priority along with reasonable salaries of the teachers. The nationalization of education also calls for active and deep attention of the government.

Avoiding political colour to appoint teachers and annihilating the political influence in running the schools and colleges of the country must be wiped out once and for all. Newspaper and electronic media appear before us with very horrible and pitiable news items that the principals and headmasters of different parts of the country are maltreated and manhandled by the local political petty leaders. The government cannot afford to close its eyes putting false blame on the teaching community. Swooping on the teachers or principals or headmasters or misbehaving with them on political grounds means slapping the conscience of the whole nation.  Under any pretext, the government should allow it to happen.