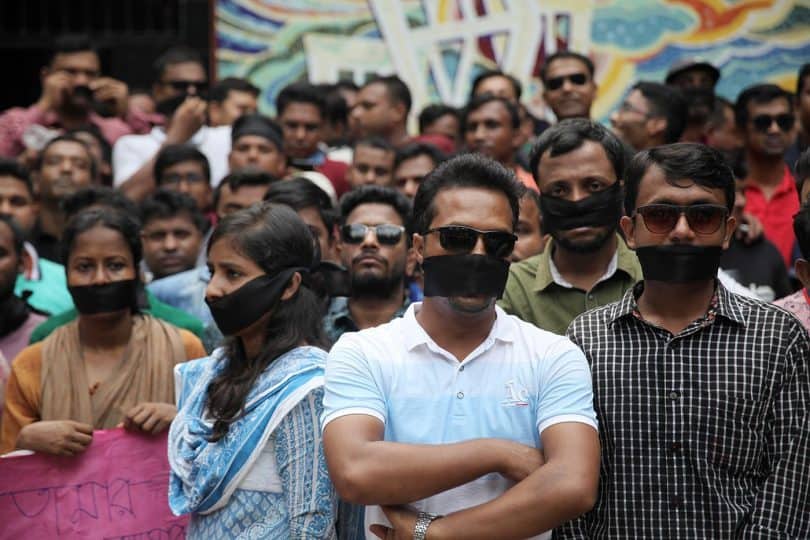 Students and nation have forgotten that universities are the highest seats of learning and learners of these institutions will prove the highest form of behaviour and attitude. Now everybody knows university means a place of chaos and centre of all nasty and rowdy politics. Even a rickshaw puller does not want to go to the university campus. Other normal vehicles usually don’t dare to ply across university areas. No caterer and contractor want to work on the university campus. All know that universities are the dens of terrors. University halls are a heavenly place for all kinds of unsocial and nasty political activities.

Nobody bothers and knows who stand first-class first but everybody knows the arms cadres, all university inmates salute them like VIPs. General and brilliant students don’t get seats in the halls whereas the third and fourth-grade so-called students remain in the halls year after year and reign over the bright and general students. They roam on the university campus like lords and emperors. Bright and common students are to live there on their mercy. No university administration and state power thought even a slight about this matter.

The whole administration becomes the hostage of these terrorists. These politics demonstrated to the nation that making brilliant results and pursuing regular studies cannot give wealth, security, and a job. It nicely demonstrated that the rowdiest, irregular, arms cadre become super successful in life. They have palatial houses, cars, huge bank balance and hold the wand of leading this hapless nation from root level to the city. These university mastans take the license to continue their mastani at all levels of the nation. The nerve of the nation has been poisoned and broken by this nasty student politics. This politics has created third grade and fourth-grade leaders who never attended any exams, honestly, who hardly touched the books but take the responsibility to steer the nation. And see what they have given to this nation.

University teachers deserve the highest degree of honour. But this poisonous politics has made them shed all sorts of morality and developed acrimonious relations with the students. They have become allegiance to corruption and corrupt student leaders. They fawn upon the government to hold some comfortable position. They sacrifice their morality and resort to doing any kind of heinous crimes. They employ new teachers on the basis of their party allegiance, not on the basis of merit and academic performance. Result also accrues from this kind of consideration. Teachers loyal to AL never make first to the students who don’t support AL. In the same way, the supporters of BNP or Jamat do the same thing.

Our politics has given us this thing. Still, many intellectuals are in favour of student politics. Why? For fear of student mastans nobody dared to utter this word. But by the grace of Almighty now time has come to open our mouth to talk against student politics. Always they refer to the glorious role of the students. Definitely, students will play the role they played in all national crisis. The nation expects this kind of role and contribution from the students and in order to respond to this call of the nation, students need not attach themselves to any political party like AL or BNP.

In any critical moment of the nation,  they will shoulder the responsibility just like patriots.  They must not play the role of a particular party with some ulterior motive. We have developed very peculiar and bitter experience about university life. The sights and scenery of my university life are still vivid in my memory. For fear of the cadres who are supposed to remain in jail drove us from the halls and at night we had to come out of the halls. We are the sons of this soil. We have been honest and sincere in our studies. But the dacoits and animal-like students reigned in the campus. Immediately and forever ban student and teacher politics. Let the teachers start conducting research and let them give something to the poor nation. Let the students read their books and come to the class without chanting so-called slogans for their leaders who are the national thieves and dacoits.

These so-called leaders have sold the nation. Students must not hanker after them. They must not adore them. Rather they should try to give something to the nation which has given them the opportunity to study in the university. Recently the law adviser expressed his opinion about the political activities of students and teachers in public universities. He also mentioned that for the greater interest and benefit of the nation we should move forward to ban both student and teacher politics on the campus. Can we think of other means by which students can raise their voices? Why don’t we think of alternative ways to engage students in the decision-making process? This is the time to think with innovative ideas leaving behind the old ideals of student politics. In western universities, students engage themselves in various political activities in a highly organized way. Along with their regular study, they do lots of political studies to redress academic national and global issues. If necessary they initiate a tough programme against the authorities. Academic issues are always at the centre of such initiatives.

One of the root causes of the deterioration of the public universities is said to be too much autonomy granted under 1973  university ordinances. These ordinances had been believed to be contributing positively towards the democratization of the administration of the universes.  Once seen as great virtue university ordinances are now being looked down upon as a vice, because we have misused and abused them. Criticism is mostly directed against the provisions and bodies of the university administration i.e. vice-chancellor, senate, syndicate, dean etc.

Teachers’ politics revolve around these elections. There is a natural tendency, therefore, to recruit teachers on political consideration. It is here that party politics in the appointment of the vice-chancellors, and other governments nominees to various university bodies, but the ruling party come into full a crude play. Successive governments through their appointees in the public universities have, by turn, recruited many teachers who have seriously undermined the academic standards of these institutions. Gone are the days when student politics contributed to the enrichment of national politics and to the struggle for the right of the people. It has now grossly degenerated into all-out attempts by the student affiliates of the political parties to occupy by whatever means the dormitories and the campus and establish and perpetuate their influence and authority. Let us get together to save our universities from further decay and degeneration. Time has come to review the whole situation and take some steps in the greater interest of the nation. We must not let slip any opportunity.