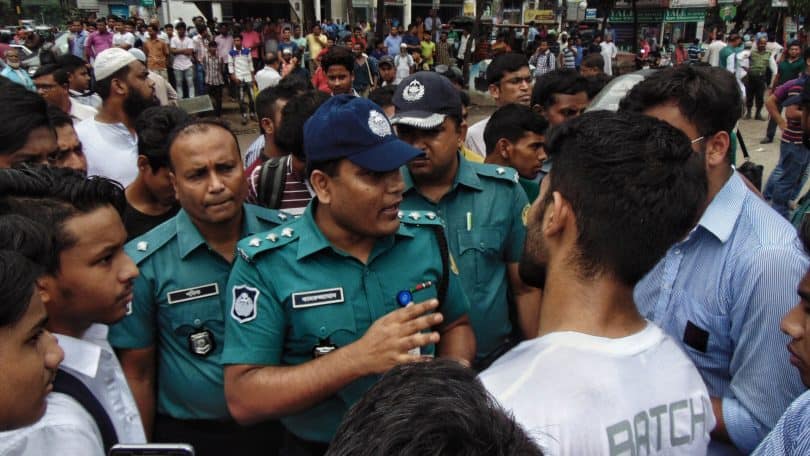 A timely and thought-provoking article appeared in the Daily Star of its September 9 issue under the caption ‘Campus Police’ which received my attention reading. During my university life, I strongly felt the necessity of the introduction of a special kind of police force in the university and university college campuses which would be different from the existing normal police force of the country and my proposal was sent to English dailies which received very little importance and it got published in the letter column.  Today’s article by A.N.M. Nurul Haque brought me back to my university life and I must appreciate the concern of the writer who regularly contributes to the DS. I like to add some more points to his proposal.

Sudden incidents, occurrences, accidents and crimes that occur in higher education institutions call for a different type of dealing which the normal and existing police force cannot address pragmatically. The context and nature of the incidents of university or colleges label themselves different from those happen outside the campus. The traditional and non-technical police force find it difficult to deal with. Suppose, the arrest of university teachers and arrest of a criminal stand far apart which normal police can never understand. From these perspectives, we strongly feel the necessity of introducing a highly qualified, education and technically professional police force to maintain peace and order in our higher educational institutions.

Recruitment of campus police will be according to the usual procedure of the police department but when they will be deployed on campus, they will be under the university administration. If the administration desires, they will ask the police authority to transfer the members or officers. But all the police will be with the mainstream police of the country. All campus police should be minimum graduates and all the officers must be Masters Degree holders from university so that no student can have any shrinking eyebrow towards the police.

They will be of high value and the job will be a prestigious one. The recruitment process will also be different though all of the officers would be civil servants even then special attention to be given to the process of recruitment. Both high ranking police officers and university teachers will be on the viva-voce board. Their transfer will be among the universities, university colleges and colleges. The Proctor of the university will function as a home minister of the campus and the campus police will be under his command. Of course, there will be a high ranking police official (DIG in universities and SP in the university colleges will work under the command of proctor) will be in the universities and colleges. Campus police will be without heavy arms always on the campus. Only during any emergency or dangerous situation armed and riot campus police will appear on the scene.

But they will always be ready to respond to any emergency or untoward incident on the campus. Intelligence police will be on the campus always. Arranging personal security of VC, Pro-VC, Proctor, and Registrar will fall under the purview of their normal duties. Ensuring the security of campus will be their duty. Students passing out of the university need police verification for their job, going abroad, making a passport. Campus police will issue the police verification report on the basis of their performance on the campus during their university life. At present it takes time and the system is not transparent at all to have a police verification report. Suppose, a student of Dhaka University hailing from Patuakhali needs police verification from his own thana where he/she may be a stranger or unknown. Usually, students remain unknown to their own areas. In this case, the police give a false report and take bribe from their parents or relative of the candidates.

When campus police will give clearance, it will be a genuine one. All the private universities will also be brought under campus police administration for these purposes as the contribution of private universities nowadays is not less than public universities. A considerable number of students seeking higher education find their place in private universities which proclaim their existence all over the country ranging from the capital city to metropolitan and even muffassail towns covering middle and higher strata of people. So, the introduction of campus will see greater importance. The writer says that Howard University in Washington DC has very inventive campus police which works cooperatively with the District of Columbus Metropolitan Police and other District of Columbia and federal government agencies. This campus policy is a composite of the five sections namely Field Service Bureau, Personnel Department, Training Section, Investigation Section and Operation Section. Our campus police will also have a different department to smoothly function the necessary affairs of the campus. The matter calls for serious attention and thinking of the authority concerned.