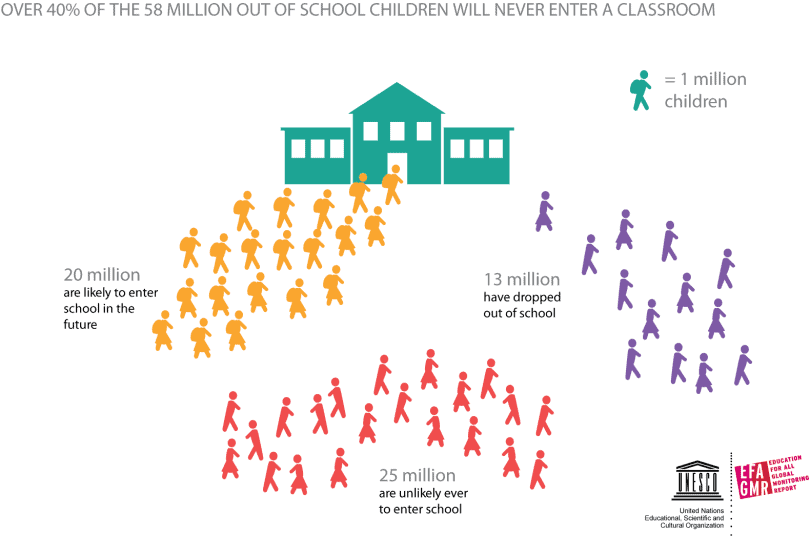 In the second week of July in a donor meeting it was discussed that the government has given an statistics of primary school enrollment which has almost reached hundred percent. I happened to be there. Probably in one or two years it will reach hundred percent. If this is the case, the NGOs working for education particularly in the pre-primary and primary sectors will have to move their directions to other fields being happy with the performance of the state. But on 25 July English daily carried a report that there are many out of school children, one in every four children in Bangladesh is still out of school. The report based a UNICEF supported study titled ‘Child Equity Atlas: Pockets of Social Deprivation’ said the progress in attaining equity in uneven in Bangladesh despite impressive trends observed in reaching general parity in education, school enrollment and youth literacy. Earlier another study carried by the United Nations Educational Scientific and Cultural Organization revealed that 9 percent girls in Bangladesh aged between 7 and 16 years of the extreme poor families comprising about one-third of the total  population have no access to school. This figure is higher than those in Bhutan and the Maldives but lower than those in India and Pakistan.

Currently 77,488 children with special needs of various types are enrolled in primary schools. Contrary to the overall and general trend of girl’s enrollment in schools being higher than that of boys, the enrollment of girls with special needs is significantly lower than boys. There are many children who are not going to school but who could attend if schools were more inclusive using child-friendly. No special arrangements have also been made to make their education available.

From its inception in 2004, the Bangladesh Reaching Out of School Children (ROSC) project has provided “second chance” primary education to over 790,000 out of school children in more than 23,000 learning centers. Beneficiary students, more than half of them girls, come from the 90 poorest upazilas of the country. The project, backed by funds and technical assistance from the International Development Association (IDA), blends formal education with non-formal means of delivery to the young learners, providing them with an opportunity to complete grade five and transition to secondary education. 790,000 out of school children have been enrolled and 90% attendance rate achieved in 2004, nearly 1.5 million primary school-aged children were out of school in Bangladesh. The government’s Primary Education Development Program (PEDP) focused on the formal primary sector that supported about 17 million students, yet still could not bring many children back to school. These were the children who had missed out schooling at the right age or had been forced to drop out, mainly because of poverty. The ROSC project provides access to learning opportunity for out-of-school children by providing stipend allowances to students and grants to learning centers. With community management as the fulcrum, buttressed by a partnership between the government and non-governmental organizations (NGOs), the approach focuses on the establishment of learning centers. These are set up through a Center Management Committee directly accountable to parents and students, as well as the Ministry of Primary and Mass Education and its upazila field offices and NGOs as implementation partners. Operational program delivery differs from the norms in primary schools in order to cater to specific needs of students (Reference: Quality Primary Education, UNICEF, Bangladesh).

As an upshot of the good initiatives of the previous and present government, the poor community’s enrollment in schools has increased drastically. The NGOs are the significant partners to implement the objectives of the ROSC project. Communities receive direct funds from the government and use these to pay for the services of NGOs for an initial start-up of the learning centers, and teacher training support. At the field level, the Ministry of Primary and Mass Education’s Upazila Education Officers facilitate the establishment and monitoring of learning centers. The first phase of ROSC was a pilot project implemented in just 60 poor upazilas across Bangladesh and with additional financing, it was expanded to another 30. To scale-up, the impact of an already tested and proven ROSC approach a follow-on initiative, the Second Reaching out of School Children Project (ROSC II) was approved in October 2012. The $130 million projects will bring back to school an additional 720,000 children from poor and disadvantaged families by providing stipends to the students and grants to the Learning Centers. It will cover 148 remote or poor upazilas and help these children complete primary education in the learning centers and move on to formal secondary education. Some individual entities sometimes bring out some pictures of education in the country which makes us moved. An exclusive Research and Monitoring Unit/Cell of the government should conduct research and monitor the whole effect of primary, secondary and higher education respectively at a regular interval to keep the people updated.