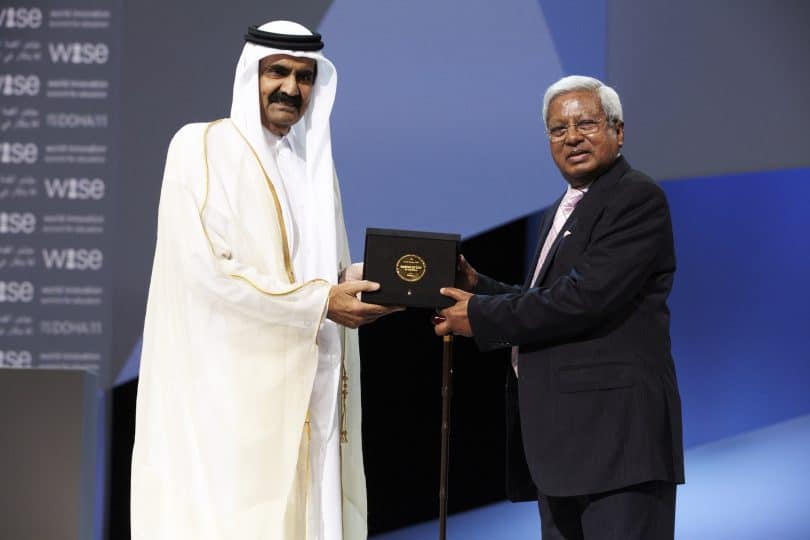 Sir Fazle Hasan Abed, the founder and chairperson of BRAC, was honoured with the third World Innovation Summit for Education (WISE) in Doha on November 01, 2011. It is the recognition of his four-decade-long contribution to reducing poverty through education in Bangladesh and for spreading its model to other parts of the world. 1300 delegates across the world participated in the session. A uniquely designed gold medal with the word’ education ‘in over 50 languages was presented to Sir Abed. In addition to it, $500000 was awarded to him. “It’s a great privilege to receive such a prestigious award. The recognition belongs to BRAC the organization I founded 40 years ago.”- Sir Abed said.

Over the next forty years, he built the organization with an aim to empower people to grow as individuals. He added “On behalf of 85000 BRAC staff and 45000 BRAC school teachers that I humbly accept this award. We have helped 1.5 million families to get out of extreme poverty and we are providing financial support to more than 8 million families in Bangladesh alone. The achievement I am proud of is providing high-quality primary education for 5 million poor children who were out of school children in Bangladesh and now there are 1.2 million children enrolled in our schools”. Sir Abed earned a British knighthood in 2010 and a Clinton Global Citizen Award from former U. S. President Bill Clinton in 2007. He has also received the Henry R Kravis Prize in Leadership, David Rockefeller Bridging Leadership Award and the Gates Award for Global Health from the Bill and Melinda Gates Foundation and the Conrad N Hilton Humanitarian Prize.

The theme of “Changing Societies, Changing Education’ goes this year’s WISE summit. It discusses how education can become more effective in tackling social, economic and political challenges and promoting sustainable development in a rapidly evolving world. WISE is dedicated to building the future of education through global collaboration. The Qatar Foundation, under the patronage of Her Highness Sheikh Moza bint Nasser, founded in 2009. Its mission is to address the challenges facing 21st-century education, expand the dialogue around the world and implement practical and suitable solutions.

WISE holds an annual international summit that provides a unique platform and meeting place for leaders and experts to share best practices about education. An 11-strong international committee of educational experts made a preliminary assessment and a high –level eminent individuals chaired by Dr. Abdulla took the final decision. The members of the WISE Prize 2011 Jury also includes Dr. James H Billington, Librarian of Congress, USA, Naledi Pandor, Minister of Science and Technology, MP South Africa, Prof. Jeffrey D Sachs, Director of the Earth Institute, Columbia University, USA and Fatma Rafiq Zakaria, Chairman of the Maulana Azad Educational Trust, India. WSIE chairman and also the chair of the Jury said, “Our aim is that the prize should raise global awareness of education in all societies and create a platform for innovative and practical solutions. Sir Fazle Hasan’s life and career embody the values of WISE. He recognized that education is a passport to social inclusion and opportunity. He discovered a successful formula, and he adapted and expanded it first in Bangladesh and then in other countries.”

BRAC operates in more than 69 thousand villages of Bangladesh covering an estimated 110 million people through its development interventions that range from primary education, essential healthcare, agricultural support and human rights and legal services to microfinance and enterprise development. BRAC went to Afghanistan with its role model in 2002 and now it works in eight countries in Asia and Africa. After just five years in Uganda, BRAC and the MasterCard Foundation already reach over 2 million people and are on schedule to reach 4.2 million people or over 12 per cent of the population by 2016. BRAC has exceeded commitments made in 2007 to educate youth in the poorest parts of Africa and Asia, having committed to mobilizing $271 million for education at the Clinton Global Initiative conference in 2007, with a goal of reaching 7.5 million children by 2012 BRAC has already raised more than $288 million to reach 5.6 million children. BRAC introduces social and emotional learning into its curriculum, teaching self-awareness, self-management, social awareness, relationship skills and responsible decision –making. This approach is especially important in conflict and post-conflict environment life which are the practical phenomena of the lives of children of developing countries.

Abed is the first recipient of the prize which was conceived in 2010. The WISE Prize is the largest prize of its kind in the world and is considered as a Nobel Prize for the field of education. The WISE committee has rightly chosen the individual for this prestigious award. We think it also hints at the Nobel committee in Oslo. His vision, resourcefulness and determination are vital ingredients of the innovation process and he stands as an example to all of us who believe that education, more than anything else, determines the destiny of individuals and societies. The issue of inequality has been thrown into the forefront of world politics. How do we begin to address this? Sir Abed answers “We start with education because education is the great equalizer. “Innate talent is distributed equally around the world at birth, knowing no bounds of geography or class” says Susan Davis, president and CEO of BRAC USA.” Opportunity is not. We need to redress that imbalance if this world of 7 billion is to prosper as whole.”