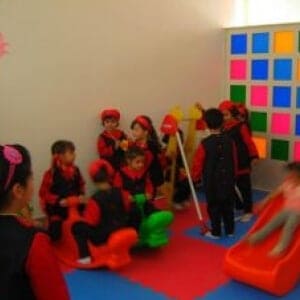 KG schools have mushroomed at every nook and corner of the country ranging from the remotest village to the capital city. This fact coupled with the recent terrorist attacks has drawn the attention of the government to look into the necessity, quality, and legality of the existing KG schools of the country. Kindergarten is a preschool educational approach traditionally based on playing, singing, practical activities such as drawing, and social interaction as part of the transition from home to school. The first such institutions were created in the late 18th century in Bavaria and Strasbourg to serve children both of whose parents worked out of the home. The term was coined by Friedrich Fröbel whose approach globally influenced early-years education. Today, the term is used in many countries to describe a variety of educational institutions and learning spaces for children ranging from two to seven years of age, based on a variety of teaching methods.

I remember one news regarding KG schools of Bangladesh titled about one lakh kindergartens are flouting government rules on mandatory registration and running without adequate classroom facilities depriving students of proper education which appeared in several newspapers last year. It further said, only 302 out of an estimated 1,00,000 such schools were registered with the Directorate of Primary Education till April 2015, in four years after the Non-government Primary both Bangla and English medium School Registration Rules, 2011 was enacted in August 2011. Another line was there ‘the government’s failure to enforce the new registration rules and lax monitoring paved the way for kindergartens to mushroom.’

The 2011 law says non-government primary schools after submitting an application for recognition divisional deputy directors will visit the schools and in 60 days after receiving application will be sent to the Directorate of Primary Education (DPE). On the basis of this recommendation, the committee formed by the ministry will give primary recognition to an institution for one year. Then three years of temporary registration and on its basis registration certificate to be given to the institution. However, the registration procedure was stopped due to these complexities. There are 07 deputy directors in the field. If they start visiting the schools for bringing them under the registration process they will be able to visit 260 schools in one year if they visit one school each day and thus only 820 schools can be visited in one year. It will take 38 years to complete visiting 70 thousand KG schools. If the number stands about one lakh it would take several more years. Under this perspective, the taskforces have been formed. The unnecessary KG schools will be closed and the necessary ones will be served show-cause notices. If they can supply satisfactory answers only then the government will think of their running the institutions.

Emily Richardson is a Ph.D. student at Columbia University in New York who is conducting research on fee-paying primary /KG schools in Bangladesh. She came to Dhaka and studied different types of primary schools, especially private ones, including kindergartens. She had meetings with several education people including me. Her important queries include- (i) what is the quality of KG school education comparing to government primary schools, (ii) whether I support forming teacher association of KG schools, and (iii) what is the difference between the teachers of KG schools and government-run primary schools. It says our KG schools occupy a significant position in the field of education having many problems which need to be addressed.

487 upazilas, 64 districts, and 8 divisions each will have a task force and each task force will be comprised of five members.  KG schools of upazilas will be visited and monitored under the leadership of the Upazila Nirbahi Officer and those in the district headquarters and outside the Upazilas will be seen under the leadership of Deputy Commissioners. Divisional commissioners will work with the KG schools of the metropolitan areas and divisional cities. These taskforces will look into the things – (i) Develop statistics of KG schools as the exact number is not recorded in the government register, (ii) will see what books are taught here, (iii) whether they use NCTB books or foreign books only,  (iv) the qualifications of the teachers, (v) the way of recruiting teachers, (vi) how is the salary of the teachers, (vii) the areas of collecting fees, (viii) the source of finance of establishing the school, (ix) where the income is spent and (x) whether the expenditure is done following government rule. On the basis of these points, the taskforces will recommend how many schools are necessary, who follow the criteria, and which should be closed. Actually, before eviction, a legal basis is necessary for the ministry and so the taskforces have been formed.

The main objective of forming the taskforces is to bring all the KG schools under the frame of law. The PM has directed to lessen the burden of books and bags of the children and NCTB has lessened the size of the books accordingly. In government schools, the use of books is lesser than the private ones. Some kindergartens unnecessarily suggest a number of books without considering the age of children. This issue needs to be monitored rigorously by the authorities concerned. If authorities are not concerned about it, the guardians must consider this matter for the sake of their own children. Children must not be overburdened. The prevailing chaos in kindergarten education has clearly been the result of regulatory, monitoring, and enforcement failures by the authorities concerned.

The government needs to revamp its Directorate of Primary Education with an adequate workforce and enhancing its service quality so that it can intensify its monitoring and go after the non-compliant institutions to make them abide by the rules. The purpose of kindergartens is to teach children a rich, meaningful, and balanced curriculum of skills and information through age-appropriate activities that encourage children to want to learn more.  It is important to note that children who may be academically ready to start school may not have the social skills needed to be successful there. Froebel began the first kindergarten to allow children to socialize while at the same time learn concepts needed for school. We cannot afford to disregard these points. One thing to be remembered that the existing government primary schools cannot replace KG schools for some obvious reasons. The purpose, objective, situation, and environment of government primary schools don’t match at all to satisfy the criteria of developing the children for future schooling.

The government wants all the KG institutions to be brought under registration. Nazrul Islam Khan, additional secretary of the ministry of primary and mass education said, “Most of the KG schools established in different parts of the country have not been run legally. We don’t know whether there is any necessity of these schools.” This seems to be an evasive statement. The government must know how many schools are necessary for the citizens according to the density of population across the country. Some rules are made regarding establishing and controlling the non-government schools of all levels which don’t go with the local and global changing perspectives. These things must be taken into consideration. Only developing recommendations to close down the KG schools without ensuring the sound pre-schooling system for our future generation may not prove a reasonable step.