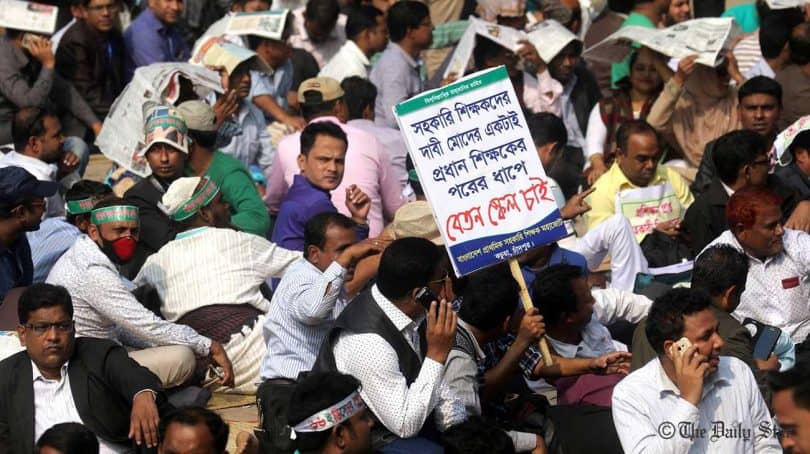 No sooner had eighty thousand teachers of twenty thousand registered non-government primary schools left the street than the government primary school teachers occupied the street. Thanks to the leaders of primary school teachers for selecting a very technical and strategic time to press home their demands. If the present regime gets back to power they will forget the demands of about two lakh teachers. The opposition will behave in the same tone if comes to power. So, the present is the proper time to squeeze anything from the political parties.

Living in the age of Universal Primary Education it goes with our expectation that non-government primary school teachers would take to the street to press home their demands earmarking one point that is to nationalise them. when the root cause of our lagging behind has been identified as the lack of our education, we strongly support their demand and agitation. Necessarily having elementary education from the state is the fundamental right of every child irrespective of colour, caste, creed and religion. Their several days’ agitation and hunger strike invited the attention of the government which came forward with some incentives and teachers got pacified though their main demand of nationalisation of their job was not realized. They just received only ten per cent of their salary which they now get fifty per cent from the government.

They get from the government only 100 taka as house rent and 150 taka fixed medical allowance, which seems to be a farce. These salary also they don’t get regularly and to live in a state of uncertainty. The government primary school teachers can make a sound and dependable monthly budget of their families as their salary is sure to be got after a certain date.  It is the cruel reality that with some possible exception most of the teachers of non-government secondary school teachers get only the government benefit, no money is given them from the school. They are to depend on that government grant only for their survival.

The more grim picture is to get this 90% government benefit they had to take to the streets and many agitations through our governments declare boldly the highest budget for education every year. The difference between the non-government and government teachers registered a serious setback and disparity in respect of salary and social status till 1981when the then government introduced a uniformed national scale for the government and non-government secondary school teachers. But the tragedy was only 50% of government benefit of their basic salary was started giving to the teachers and the disparity remained as it was. Since then twenty-five years have elapsed but the teachers enjoy only 90% of their basic salary. This history taught the teachers to take to the streets to realize their demands.

What rationale lies behind the strike of government primary school teachers? Only salary disparity between trained and non-trained teachers and asking to them to start School-Based Assessment. Does it prove a plausible cause to resort to such kind of tough programme? Could it not be done through dialogue or discussion? Don’t they have any responsibility towards the little children like buds? What has happened to this hapless nation? The political parties have already made all the countrymen their hostage. When they desire people can go outside, when they don’t people cannot. Using police force they make the general people arrest week after week and fabricate a false case against them bringing untold miseries to the lives of common men. In this poor country, our government primary school teachers are not well off but not leading miserable life as well as non-government secondary school teachers and non-government college teachers even.

Schools are passing very important time, as it is the middle of the academic year when children start learning something as the previous part was occupied by sports, exams, results and vacation. Again the question arises when we look at the standard of primary education of the country. In most of the cases as our experience say many primaries passed students cannot even know how to write the alphabets let alone other important and necessary elements of education. A considerable amount of students who get enrolled in class six show extremely poor performance. Do the government primary school teachers notice the thing? Don’t have they any responsibility and duty towards these students? I am sure with some possible exceptions further grim and sad picture will surface if we look at their professional dedication and sincerity.

School Based Assessment means the formative assessment of the learners. Definitely the elementary teachers must devote themselves to the development of buds, which are going to be full-bloomed flowers. Teachers should know the ways and means to implement it. They cannot afford to avoid it. Hence this system has been absent so far, they may face some difficulties at the initial stage. Subsequently they will be able to overcome the hurdles lying behind it. But we cannot support that they will keep all the 37000 primary schools under lock and key just to protest it without considering its merits and demerits.

Yes, teachers can say when corrupt politicians and black money makers enjoy very gorgeous and posh life, why not we? Teachers are the conscience of the nation. They cannot do what the dishonest politicians can do. Had conscience prevailed in our politicians, our country would not have posed this appalling situation even after thirty-five years of independence. Teachers must rise to their occasion. Definitely they deserve more facilities from the government, in order to do that they must not forget the professional duties and their position in the society. They must also think of their brothers who serve in non-government secondary schools.

The government of our country nurture many white elephants. They satisfy these organizations at the cost of people’s enhanced tax, which definitely becomes the cause of exacerbation of the common citizens of the country. Every government has absolutely failed to satisfy the demands of the teachers of all levels. The matter of teacher development remains a neglected issue since the remote past. Sometimes we hear something from the government but the genuine change and initiative has hardly been discerned. So, educating the citizens to develop them into potential human resource remains untreated and neglected.

The irregularities and inefficiencies in the government machinery make scope for the teachers to come out of the classes and create chaos. The government must cast a reasonable, judicious and sympathetic eye towards the demand of teachers. The quality of primary school teachers must be ensured at any cost. The government machinery of this sector I mean the ministry of education must give serious thought to it. The traditional way of running teaching affair must not be expected in this age of computer and the Internet. The teaching and way of teaching of the outside world have undergone a tremendous change with which our teachers must have acquaintance and this responsibility lies with the Ministry of Education. How is it that the internal problem of the primary school teachers could not be resolved by the Ministry?

Our tertiary educational institutions have been plagued by nasty political chaos and games. Arms have replaced the place of books of; the research and study of the teachers have been occupied by politics. Now teachers need not produce research articles in the journals, they need to follow some party politics. They are to prove themselves that they belong to a particular party. Instead of subject-based research, they conduct research on party politics. As a result, what the nations is supposed to receive is receiving. Students have taken shelter to private universities most of which don’t have physical facilities at all to host a university. These institutions are just running like coaching centres. Even then students gather around these institutions just to save their valuable time of life. State owned universities kill much of the valuable time of the pupils.