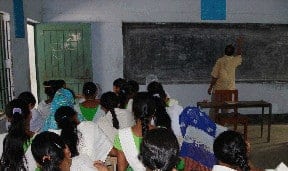 The teaching-learning scenario of English in Bangladesh has assumed a new beginning. The Grammar-translation method had been practised for a long time in the English Language Teaching context. Since 1998 in the secondary and higher secondary levels grammar-translation method has been replaced by Communicative Language Teaching (CLT). The Grammar-Translation method and the Audio-Lingual approach were the methodologies that were in vogue before CLT. These methods involved repetition and memorization of forms. Mere memorizing grammar rules and studying literary texts are considered somewhat irrelevant. Nowadays ability to use the language to meet practical ends has become the major goal of learning English.  In other words, we can say that to be successful in learning English means the ability to get the meaning across while communicating.

With the appearance of CLT second language teaching faced a dramatic change in the method of teaching the language. The main reason behind this change is that the educators began to realize the goal of foreign language teaching is the communicative ability achieved by the learner.  In the 1970s in Europe, there was an influx of immigrant population who had to learn English quickly to find employment. The drills of the Grammar-Translation method and the Audio-Lingual approach did not help the workers to communicate with their employers. ‘British applied linguists began to call into question the theoretical assumption underlying Situational Language Teaching ( Jack C. Richards 153). Since the mid-1970s the scope of CLT has expanded. Both American and British proponents now see it as an approach and not a method that aims to make communicative competence.

In this era of global communication, the purpose of learning English should be stretched from the grammatically accurate written productions of compositions and translations to the multi-dimensional oral communication in multi-faceted situations. The grammar Translation method demands the utmost grammatical accuracy which involves time, carefulness and is a slow process. To satisfy the immediate needs CLT is practised by the learners.  Communicative competence in CLT is a linguistic term that refers to a learner’s ability to form correct utterances in the second language and know how to use these utterances appropriately.

The teacher’s role had been outright authoritative in the Grammar Translation Method. Such a teacher-orientated authority used to make the students completely dependent on the teachers and devoid of the practice of speaking skills making the students be tongue-tied during the spoken communicative production. The student’s role in the overall Grammar Translation Method in the English Language Teaching situation of Bangladesh had been by no means passive and a  kind of inactive. They were supposed to remain silent during the instruction of the lessons and were to be active in a limited way only during the written production of grammatical problem-solving tasks and translations when they were used to be instructed to do so. Such inactivity during the maximum time of the lesson was used to make the students incompetent in communication in English. The CLT now reverses the ideas. Now classes are dominated by students. Students’ talking time is greater than that of Teacher Talking Time. Equal importance is given to speaking skill which remained totally neglected in GTM.

The teachers used to present the lessons in lecture-based ways. As it is already mentioned, the participation of the students was very limited during the lessons. They used to get an opportunity to participate by directly asking the teachers only when they used to fail to understand certain things. The more the class had been found silent the more the teacher used to be satisfied with having been conducted a successful class. Peer discussions, as well as other kind of activities of peer co-operation, had been far beyond the expectations. Thus a gap between the students and the teachers and also gaps at the levels of competence and proficiency among the peers were used to be created of which the teachers and the students used to remain oblivious during the conduct of the lessons. But in CLT teachers work as facilitators and behave friendly with the learners narrowing the gap between them. Hence, teaching-learning takes place in a non-threatening environment.

In the Grammar-Translation method grammar had been taught deductively emphasizing the meticulous rules and the grammatical output of the students were used to be considered based on the problem–solving tasks of the isolated sentences. In CLT only the essential grammatical elements are taught through the context-based inductive tasks and activities emphasizing not meticulous accuracy but on the overall linguistic negotiation of meaning.

GTM is lecture-oriented; in the CLT the lessons are action-oriented. Thus in GTM there had been only isolated written grammatical and problem-solving tasks and activities of translations to be individually done by the students.  In CLT, activities like pair works, group works as well as collective works besides individually done by the students and in CLT activities as collective works besides individual performances are to be conducted in almost every lesson ensuring the integration of four major language skills.