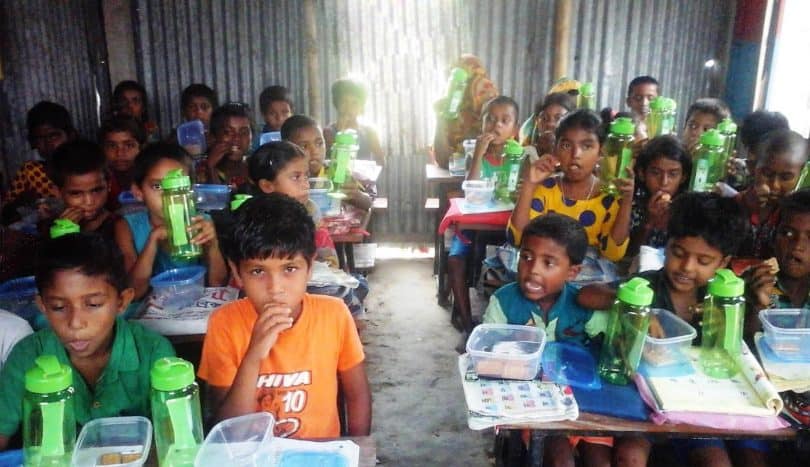 Though school feeding program seems to be a new phenomenon in our educational context, it goes on in many developing countries with good impact around the globe. In our new education policy, this idea has been ingrained. Of course, school feeding activities have been in vogue in some schools in limited areas run by non-government organizations. We hold many seminars and symposiums spend huge money for that purpose but we hardly think of those children whose empty stomachs hardly allow them to come to the schools and remain in the class after coming to school. Is it possible for the learners to give concentrate on what the teachers say in the class when their hungry stomachs cry for food?

In many developing countries school feeding programs have recently received renewed attention as a policy instrument for achieving the Millennium Development Goals of universal primary education and hunger-reduction. A well-designed school feeding program may have broad impacts on—school attendance, school performance, cognitive development, the nutrition of preschool children and the prevalence of anaemia in adolescent girls. Philippine and Bhutan are the known successful countries where school feeding program goes on in full swing and with a good return. Malnutrition affects a significant number of Filipino children, making them susceptible to disease and infection. ‘The 2003 National Nutrition survey showed that 2.9 million primary school-age children were underweight, while 3.41 million growth-stunted.

The prevalence of anaemia among children has also escalated in the last ten years, along with vitamin A deficiency. In 2003 Senator Edgardo J. Angara launched a School Feeding Program in public schools around the country, especially in depressed communities. It is conducted on a 120-day cycle, where milk, eggs and noodles are distributed to school children from grade levels 1,2 and 3. These children aged 7-9 are at their most important mental and physical development stage. To date, over 24000 pupils from the NCR and provincial schools an Abra, Aurora, Benguet, Ilocos Norte and Kioolo have benefited from this SFP program. The program saw great improvements in attendance, learning capabilities, academic performance, weight, height, overall nutritional status, as well as the reduction of drop-out rates among beneficiaries.’ (Philippine School Feeding Program, http:// www. Edangara.com/school-feeding-program)

World Food Program supports the Royal Government of Bhutan in its policy of improving access to education by providing daily meals to school children particularly from poor and food-insecure families in remote areas. This activity supports the nationwide trends of increased enrolment and attendance rates and reduced dropout rates. The provision for meals also improves the short term nutritional status of school-going children and thus supports their concentration and cognitive capacities. (http:// www .wfp.org /stories/school-feeding-Bhutan)

In July 2002 the World Food Program and the Government of Bangladesh initiated a School Feeding Program targeted to schools chronically food-insecure rural areas and in urban slums in the capital, Dhaka. The program was intended to distribute fortified biscuits to elementary school children in the targeted schools six days a week during the school year. The biscuits provide 300 kilocalories (about 15percent of the daily calorie requirement) and a range of micronutrients, contributing about 75 per cent of vitamin A, zinc, folate and iron. The goals of the program were to increase school enrolment and attendance, reduce school repetition and dropout rates, improve attention and learning capacity by reducing short term hunger and thereby improve school achievement.

The poor families cannot afford enough food at home for their children and most schools in developing countries lack canteens or cafeterias. School meals are a good way to channel vital nourishment to poor children. Having meals at school must a good attraction for the children. Again, having a full stomach also helps them to concentrate better on their lessons. In countries where school attendance is low, the purpose of at least one nutritional meal each day boosts enrolment and promotes regular attendance. Parents get motivated to send their children to schools instead of keeping them at home to work or care for siblings. The program directly addresses the goals of reducing hunger by half, achieving universal primary education and of achieving gender parity in education –all by 2015.

We have good news regarding the school feeding program. Bangladesh has started this activity in Grimadanga Tungipara Model Government Primary school in September 2011.  Dr. Afsarul Amin, minister of primary and mass education, Director-General – Shamol Kanti Ghosh and WFP Country Representative Crista Radar were present at the launching ceremony. Bangladesh government and WFP will bear the expenditure of distributing protein-enriched biscuits for 26 lakh students. Each student will be given a 75-gram biscuit containing 75 per cent flour, 12 per cent sugar, 13percent vegetable oil, 6 per cent soya flower, iodine salt, baking soda, salt-irons, calcium and zinc. A child’s 67 per cent protein will be covered by this biscuit. Primarily in poverty-stricken areas school feeding program will be launched. One thousand one hundred forty-three crore taka has been allocated in this field. It will continue till June 2014. The present program will run in 86 upazillas covering government and non-government, community school and Ebtedai Madaras with the following objectives:

In the upazila where this kind of program was going on on a limited scale earlier, significant positive results were seen there. Quality education dissemination and health of the students have improved in these areas and students became attentive in the class. Teachers of these areas reported that a significant improvement in classroom behaviour, less disruptive behaviour, better attention and motivation and less sleepiness among children were found though only eight per cent of teachers said that their workload had increased due to this program.

School Management Committee, philanthropists, educationists, affluent people of the society, various commercial organizations can play a significant role in making this program a real success. But good coordination is a must from the ministry of Primary and Mass Education.  It is imperative to time to introduce the same program in the secondary level institutions as well. The government and the NGOs working in the field of education can share the responsibilities area wise. If it is done the case of duplication and wastage of resource can be minimized. The authorities concerned should take pragmatic initiatives to introduce school feeding program in the secondary level schools along with the primary schools. The students of secondary level have to remain in the classroom for long with an empty stomach. Their growing age needs adequate food which many cannot afford. To make their classroom an attractive place school feeding activity along with fruitful and participatory works can play a vital role.