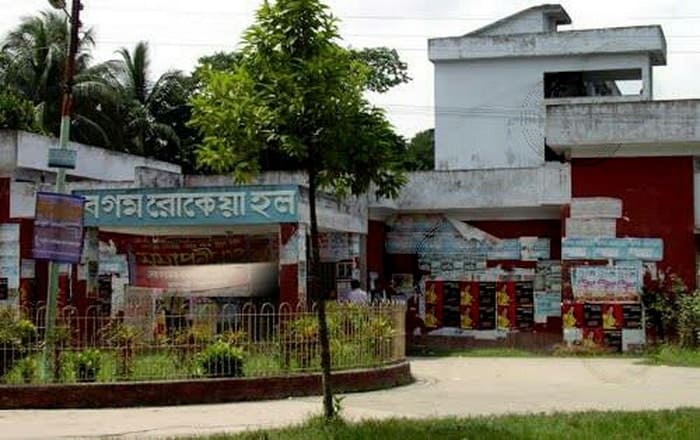 Once famous educationist and the ex-vice chancellor of Jahangirnar University Professor Zillur Rahman Siddique said in a function ‘living in the university campus itself is education.’ Rightly he made this comment. Universities are the centre of excellence, the centre of politics, the centre of learning, the centre of research, centre of socialization. Learners from various parts of the country gather here with the principal objective to receive higher education not only from the books but also from the university campus itself. Being on campus is an essential part of university education. Again, universities are located in some particular places in the country. Hence, it is not possible for many to attend the classes, libraries and other activities coming from homes and going back daily. The university halls are built along with administrative and academic buildings to satisfy the principal needs of the learners. Still, poor accommodation has been a constant problem in all the universities of Bangladesh standing in the way of the normal academic activities of university life. It is encouraging that the number of girl students is increasing in higher education. But the signal is we not prepared to accommodate them on campus.

Several days back a news item concerning the poor accommodation problem of girl students in our public universities drew my attention. It says that five of our renewed public universities can provide only a fourth of their girl students with residence in halls forcing them to share seats in the halls. Half of the girl students need to live outside the campuses by spending money a lot more than others do.  When this is the condition of getting seats in the halls, the party cadres and party teachers must have ample scope to commit corruption in terms of distributing seats in the halls. And it has become a common and known practice. Strong student cadres occupy the seats and distribute them among their party loyalists. It happens both for boy and girl students.

Seat constraints in the halls compel the girls to live in the rented flats and houses in groups adjacent to or away from the university campuses of Rajshahi, Chittagong, Jahangirnagar and Dhaka universities. This sort of living outside the campus not only throws them into an insecure situation but also additional expenses. Added to this they are deprived of the academic, common room, TV and reading room facilities.

The authorities of Dhaka University, Rajshahi, Chittagong, Jahangirnagar and Shahjalal University of Sylhet have said that they have the capacity to accommodate 11,300 girls students in their existing halls but the number of girl students gets enrolled is 42,300. The picture clearly proves that 31 thousand students don’t have residential facilities in these major universities. We also come to know from the University Grants Commission that 22,300 girl students share the seats on these campuses. The hurdle with each other facing quite opposite non-academic atmosphere. They cram in the TV rooms, Games Rooms.

Twenty thousand students have to find accommodation outside the campus. All our 34 public universities see the same situation Our Vice-Chancellors are seen participating in all the seminars, symposium, meetings and functions where the ministers, prime minister participate. They just try to win their hearts by their docile behaviour and presence. We hardly hear this acute poor accommodation problem of our girl students from the mouth of these VCs. The credit goes to the newsmen who searched for this major problem and published it in the newspapers to sensitize the people who take the decision of the state and also for those who are concerned about the higher education of the country and the spread of female education.

About 5800 girl students of five more universities such as Jagannath University, Begum Rokeya, Pabna Science and Technology, Bangabandhu Sheikh Mujibur Rahman Science and the Technological University of Gopalgonj, Barisal University suffer more as the universities don’t have any accommodation facilities for girl students. Male students also face similar or more acute problems but there is a particular concern about the vulnerability of female students living in insecure private accommodation.

University Grants Commission Chairman AK Azad Chowdhury comments on the situation thus ‘such an acute poor accommodation crisis is hampering academic activities of girl students and urges to mitigate the sufferings by building halls on public-private partnership schemes. “Yes, we appreciate his proposal and actually it should be done. Only looking at the government to extract fund does not mean running sound administration. Our vice-chancellors do politics. When they are involved in politics, why don’t they develop such a kind of public-private partnership with various national and multi-national companies to remove the financial ills of the universities? Why they just follow the politicians? Do they think that they are government officials? When they follow the politicians, they cannot give anything to the students and the university. VCs’ role in public universities must be several times greater than what they do today.