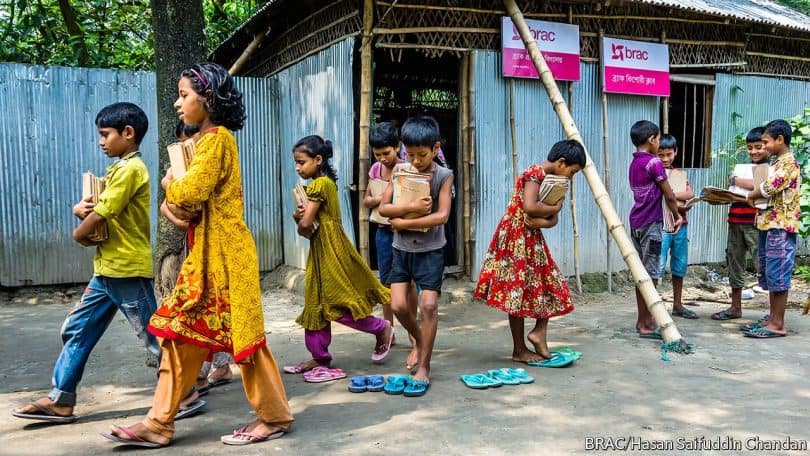 Of late four area offices of brac and two local offices of Grameen bank came under the attack of unknown attackers. It has been deduced the fact that the members of the job might have occurred this untoward incident. The whole world has been experiencing brutal attacks and counter-attacks either for some reasons or without any sound reason. Sometimes due to misunderstanding and sometimes for satisfying the anger and grievances. Whatever might be the cause, the innocent and common people are becoming the victims of these gruesome attacks creating panic and anarchy in some countries of the world and at large in the whole globe. In the greater interest of the peaceful human being, these incidents must not be appreciated and allowed to continue. And the question is: why the attack on BRAC?

There runs a rumour about the NGOs and particularly about brac among the common people. The people of our country are religious minded and fond of simple living. They live close to nature developing a serene relation with nature. Necessarily they are guided by divine law and spirit. But it unfortunate some misguided religious people try to explain the laws and rules of Islam not in their true perspective which not only makes the religion a matter of exacerbation to others but also they are misguiding themselves. These people most of the time misinterpreted the message of religion as well as the aims and objectives of NGOs working in our countries. Islam is not a religion to be viewed from a narrow perspective. The other day when I was offering my Jumma prayer in a city mosque, I heard the imam shaheed preaching to the devotees that they should do something against the NGOs which have stuck their roots in Bangladesh to convert the Muslims into Christians. How strange! The religious leaders must study a lot and preach something which means reasonable and acceptable.

Poverty reigns all over the world and it bites severely the poor countries of the world. every poor country sees the existence of NGOs as poverty alleviation and development partners. We should imagine the financial condition of the poor countries of the globe. Definitely, their condition would have been rather deplorable. Suppose brac. We should know well what brac is doing to alleviate poverty, raise the illiteracy rate and develop the standard of education. brac runs a micro-finance programme absolutely dedicated to the welfare of the downtrodden population where the government have no access.

No organisation no government go to them with the loan. Brac offers them a loan, give them training on how to utilize the loan and looks after regularly how the ongoing poor man’s project. It recovers the loan under the brac rule which seems a little compulsion but it makes them self-reliant. It teaches them how to stand on their feet and neglect to be dependent on alms and others mercy. Brac runs the largest non-formal primary education in the world. to save the country from the curse of illiteracy it works with the government. The government finds it difficult to address this gigantic problem. Only formal schooling cannot remove this problem. So brac has emerged with its ideas of non-formal primary education breaking the traditional idea of education. now it operates 340000 non-formal primary schools with one million children who would have been deprived of the light of education. Again, science, mathematics and English are vital subjects at the secondary level. Brac imparts training to the teachers of secondary level.

It obviously selects only the rural secondary schools as these schools and learners of these schools are the neglected sections of the society. The efforts of brac ascend down the poor. So, why attack on BRAC? Brac always faces another criticism that women have been invited by brac outside the home. Islam puts equal emphasis on education and due respect to women. But what happened to our womenfolk in rural areas? They have been deprived of their rights of due share in every step. Parents consider them as the burden of the family. Dowry emerges in the poor family as a curse. To save the rural women from these chronic social diseases brac invites them to come out of their home and engage themselves in economic activities on their own feet which will consolidate their position in the society and elevate their position in the family. It is not that they have been converted into Christians or these steps are against religion. Rather religion encourages and enhances the participation of female education. Actually, religion has been descended upon man to give the right direction so that they can lead a peaceful life. The world has advanced a lot.

It experiences the peak of the development of science and technology. Humanity wants to judge everything based on reason. The tendency to seek the reason does not necessarily mean anti-religion. Gob has created this universe very mysteriously. There is no end to its mystery. Who knows who is right? All the sects of religious groups claim themselves to be pure. This is the fundamental right of every sect. But the only God is the supreme judge to determine who is right and who is wrong. We should not quarrel or embroil ourselves in conflicts and strife. Islam must be followed and explained in its true perspective. We should not leave scope for others making it a questionable situation. Islam is the religion of peace, amity, brotherhood. Islam came to earth with the message not to engage ourselves in quarrels. NGOs are the development partners of the governments of all the poor countries.

The government of these countries, directly and indirectly, attach the works of NGOs with the government efforts for the welfare of the nation. NGOs try to meet up the expenditures from the donor agencies. To receive donations from the agencies they impose some conditions. When these conditions go beyond our culture, brac does not take that donation. Again, utilizing the donor money brac now is almost self-reliant through the establishment of different commercial projects such as brac salt, along, arong milk, hatchery, poultry, fisheries, livestock, brac university etc. Bangladesh government has so far received one lakh and eighty thousand taka donations from different donor agencies and countries. But the development of the country can easily be guessed by the conscious people. So, I am raising the question again: why attack on Brac?

Brac nurtures sixty-four thousand regular staff who run a family of five members directly meaning more than three lakh people are getting their bread through the projects. The number of irregular and temporary staff also amounts the same. It is seen a huge number of people are the beneficiaries of brac directly and indirectly. The space of government job proves very limited in the country. Had there been not the existence of the non-governmental organisations, what would have to our thousands of youths? Social chaos and disparity would peep through the veil of the unemployment problem. So any hasty or emotional decision or step will directly hamper the development of the country. Attack on Brac will hamper the development activities.

Those who make religion questionable to others surely to be blamed. Religion does not mean to particular kind of people. For gaining personal ends and treating religion narrowly deserves to see its bitter fruit. All the religious scholars must come forward in the juncture of the nation and unfold the true message of religion to the people, to the world. no scope must be left to make the religion a focal point to be discussed negatively. Government is the custodian of the citizens. It must nod all its efforts to face and suppress all kinds of anarchy. We nurture different kinds of intelligence agencies. Through these agencies, the government must unearth the clues of these heinous activities and give exemplary punishment to those who will be found guilty. The nation needs the true sincerity and effort of the government. Real religious people also feel insecure. Bangladesh is a country of peaceful coexistence of different religions. In no way we should tarnish this image. We must not follow the heinous activities of other countries. It is true that many countries of the world see extremism and religious conflicts. At any cost, we cannot let it happen in this country. Attack on Brac is not accepted.