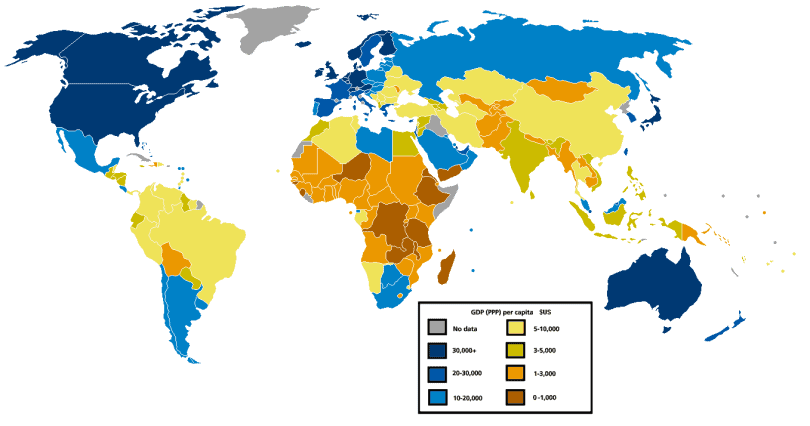 Abstract: The education and GDP indices are two components to determine the human development index set by the United Nations Development Programme (UNDP). There remains a high level of income and educational inequality between the countries of the world. This paper found that the correlation between Education index (EDI) and GDP index (GDPI) is significant for the high and medium GDPI countries; by contrast, it is not significant for the low GDPI countries. This paper finds that in general income differences play vital role to lead the discrimination in educational achievements with some exceptions and at the same time there remains a noteworthy differences among the education indices within the low-income countries.

I. Introduction Today, in the era of globalization, almost every country is related with each other and the overall development of the world cannot be measured separately – ideally this statement sounds great. By contrast, the reality is that one in four adults in the developing countries – 872 million people- are unable to read and write, and their numbers are growing. (OXFAM, 2000) Just one of the facts is enough to show the scenario of the precarious educational situation of the developing and undeveloped countries of the world. In addition, under the same sky there remains a huge `North-South Inequalities’ in education. For instance, per-capita spending on primary-school pupils in Nepal and India is about $12; in the US, it is $5130. (ibid) Nonetheless, it is universally accepted that education is one of the most vital instruments and components to stimulate as well as to measure the overall economic and human development of a country, it is visible that income differences play vital role to lead the discrimination in educational achievements. However, at the same time, achievement on education within the low-income countries is not the same at all.

This paper is divided into six sections. The section II, Research Question, mentions the query of this paper. The next section, Conceptual Framework, illustrates the definition and measurement scales. The section IV, Methodology, demonstrates the method of this study and according to the method the data and findings have been presented in the following section. On the basis of the findings the conclusions have been drawn.

II. Research Question
The question of this paper is whether within the lower-income countries there remains any significant relationship among the educational achievements. So, the formulated hypotheses are:

III. Conceptual framework
The Human Development Index (HDI), introduced by United Nations Development Programme (UNDP), is the summary to measure the human development of a country. The following table-1 shows the three different dimensions, indicators, and indices to calculate the HDI.

IV. Methodology At first, the correlation between EDI and GDPI in the world and high, medium, low indices countries has been calculated by using SPSS. According to the results the significance of the hypotheses were found.

Afterwards, the EDIs have been classified if any noteworthy differences were seen. Then some comparisons have been exposed according to the following criteria:

V. Data Collection and Findings The data were collected from `Human Development Report 2004’ published by UNDP. They have listed 177 countries and provided data for 2002. This study is based on these data. The significances of hypotheses are expressed in table2.

Table2: Correlation between GDPI and EDI

According to table 2, it is found that at 0.05 level of significance the hypotheses no. H1, H2, H3 are accepted but H4 is rejected. Thus, the results show that there remains a relationship between education and GDP indices for the world, high and medium GDP indices countries, in contrast, with the low GDP indices countries.

From the human development indices of the different countries of the world, among the low GDPI countries, the EDI of some countries are admirably well. The EDI of some low GDPI countries such as, Kyrgyzstan (GDPI=0.46), Uzbekistan (0.47), Tajikistan (0.38) and so on is higher than 0.9, whereas, in Equatorial Guinea (GDPI = 0.95), United Arab Emirates (0.9), Oman (0.82), Saudia Arabia (0.81)- with higher than  0.8 GDPI-  their EDI is less than 0.8. Even the EDIs of some medium GDPIs countries (for example, Vanuatu, Mauritania, Angola, Guiena etc.) are lower than some of the lower GDPI countries, like Kenya, Congo, Myanmar and so on. However, within the low GDPI countries the differences of EDI is noteworthy. With the same or nearby GDPI level of the previously mentioned low GDPI countries, the EDI of Pakistan (GDPI =0.49), Gambia (0.47), Senegal (0.46) is just about 0.4. In addition, the GDPIs of Tajikistan and Burkina Faso are 0.38 and 0.4, respectively. But with this almost same level of GDPI (even it is slightly higher for Burkina Faso), there remains a remarkable difference between the EDI of these two countries -EDI of Tajikistan is 0.9 and Burkina Faso is 0.16.

VI. Conclusion The forthcoming discussion has shown that the GDPI is not the sole components to have a higher EDI. Since, even with lower GDPIs, the EDI of some countries are even much higher than the high and medium GDPI countries. Again, among the low GDPI countries the differences of EDI are outstanding. Therefore, it can be sighted that the other factors, such as, political stability, empowerment of women, history, culture, geography, law and order and so on may play a vital role to determine the EDI of the low GDPI countries.

Radia Tamim is interested in the field of social and economic development, especially, in the sector of research and project management. She is involved with social and cultural activities and study circles. Her book on Prenatal Education (in Bangla) and Climate Change and vulnerabilities of Women: voices of the victim have been admired by the readers. She is an adorable mother of twins.