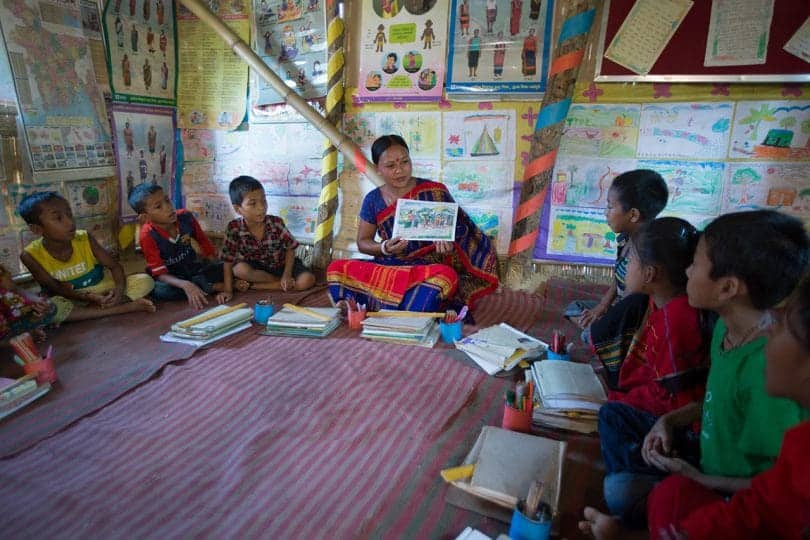 Primary education in Bangladesh has been expanded in recent years, but the quality did not improve with quantity (Nath, 2002). To increase access to education, the government permitted ten different types of primary education schooling provision. This ranges from formal school to non-formal school, secular school to religion-oriented school. The majority of the students enroll in state-owned primary schools and non-formal schools. Mostly, the non-government organizations (NGOs) are operating non-formal primary schools and BRAC operates the largest share of such schools.

BRAC, a development organization founded by Sir Fazle Hasan Abed in February 1972 soon after the liberation of Bangladesh, has acted as both the initiator and catalyst for many social innovations and change. Its initial focus was on assisting the refugees returning from India to their newly independent country. BRAC’s unique, holistic approach to poverty alleviation and empowerment of the poor encompasses a range of core programs in economic and social development, health, education, human rights, and legal services as well as disaster management. Today, BRAC is the largest southern NGO employing 120,000 people, the majority of which are women, and reaches more than 110 million people with development interventions in Asia and Africa (BRAC, 2009).

In the modern world, the population of a country is considered a resource if the state can provide them proper education and work opportunities. Bangladesh is no exception and is trying to emphasize the importance of educating its people. The constitution of Bangladesh also states about the provision of basic necessities which includes the adoption of uniform, mass-oriented, free and compulsory education by which an equitable state can be formed so that all kinds of exploitation can be removed (GoB, 1998)

After the liberation, the government emphasized the basic setup and expansion of primary education in Bangladesh. With an ordinance, the government took charge of all existing primary schools in 1974 (GoB 1973, 1974). But practically, it was difficult for a new and poor state to take the full responsibilities of the primary education of a huge population. So to meet up the demand for primary education, many private (non-government) education providers came and established primary schools. As a result, there are 10 different types of primary educational institutions existing now in Bangladesh (DPE, 2008; BANBEIS 2006, 2009) and they are following 3 different curricula. The management authorities are also different for different types of educational institutions. The table given below will give an overview of the differences between these institutions.

Since 1990, the government has been taking many initiatives to improve the quality of primary education in Bangladesh. Compulsory Primary Education Act was passed in the national parliament in 1990 (GoB, 1990). A five-year education project named General Education Project (GEP) implanted from 1990 to 1995. Primary Education Development Project (PEDP-I) consisted of 27 different independent projects that were implemented during 1997-2004. Then PEDP-II started with a huge budget of US$1815 million where the government of Bangladesh shared 64% of it and the rest was provided by the Asian Development Bank (ADP) and other ten different donors. 85% of the allocations were allocated for quality improvement in schools and classrooms, quality improvement through infrastructure development, and improving and supporting equitable access to quality schooling (Education Watch, 2008).

In spite of the government’s many initiatives, many children in Bangladesh still remain out of formal primary education every year. Still in many places, particularly in remote areas and hilly areas, the number of government schools is not adequate comparing to the number of students. Sometimes the distance between students’ homes and the school is too long and many students feel discouraged to continue their schooling. Poverty is another reason for many children who are not attending the formal schools. Though government primary education is supposed to be free but still there are many hidden costs that parents have to spend for their children’s primary education.

The dropout rate of the children from primary schools is also very alarming. The data from government and registered non-government primary schools show that almost half of enrolled students dropped out before completing their primary education cycle (DPE, 2008).

The role of BRAC in non-formal primary education

Initially being a development organization, BRAC’s every priority was concentrating to empower the rural people particularly the rural women.  In mid 70’s, just after the liberation, BRAC was running some functional literacy programs for adults. Then many women expressed their concern about the education of their children to BRAC. In response to their concern, BRAC opened its first non-formal primary school in 1979 (Prather, 1993).

BRAC then found that many children in rural areas were kept out of reach from the formal education. So BRAC continued scaling up its non-formal primary education provision and by 1987 BRAC established 410 schools. In this time, BRAC scaled up its non-formal education with a rapid speed and by the end of 1991, BRAC had established a total number of 6003 schools. While expanding the non-formal education program, BRAC felt that it is very difficult for the government alone to provide schooling for all the children of Bangladesh. So BRAC expressed its commitment to finance for 44000 schools by 1995. Nevertheless BRAC always believed that it is the government’s responsibility to provide education to all citizen. So when government was able to cover up more children for primary education, BRAC naturally reduced the number of schools it supported.

BRAC non-formal schools are not permanent institutions. BRAC opens a school wherever it finds around 30 students at the age from 8 to 11 who are without school provision. The children are mostly the left out or dropped out of the formal primary education. So BRAC takes this group of children who enrol together in grade I and move together through four years of schooling. After completion of the cycle for one group of children, BRAC usually does a survey to find another batch of 30 children. If BRAC can find 30 children who can meet the criterion to be student, BRAC starts a new batch in that school.

By definition non-formal schooling has some flexibility compared with mainstream formal primary schools. Non-formal schools allow students in grade one even if the students have crossed the age limit defined by the government for grade one enrolment. The timing of the school is also flexible and it considers the convenience of the students.

A BRAC school is not like formal primary schools in many aspects. It is a single room school. The room size is around 336 square feet. The maximum student capacity is 33 students per school. There is only one teacher for one school. The teacher is recruited from the local community. The minimum educational qualification for the teacher is 10 years of schooling experience. So the teacher starts with a batch of students in year one and she continues with the same batch up to year four. BRAC schools cover all the primary competencies in four years where as the mainstream government primary schools are designed for five years for children to achieve these competencies. There is no table or chair in the schools. Students sit on the mat floor. Education is free for all the children in BRAC schools. There is no terminal examination and no formal assessment is administered at the end of year but throughout the year continuous assessment of student’s achievement is done by the teachers. But at the end of fourth year, every BRAC student has to undertake the primary completion test which is a standardized test compulsory for all students who complete their primary education.

BRAC non-formal primary education has introduced and implemented some effective strategies in both classroom teaching and learning practices and educational management. Some of the key strategies used are described below.

Toufiq Hasan is a Post-graduate student of the University of Manchester, United Kingdom.