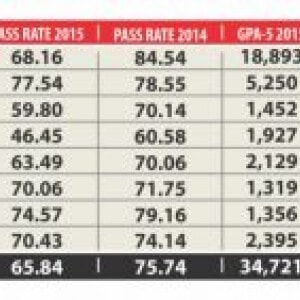 The results of the Secondary School Certificate examination came out with the message of a significantly high pass rate and higher grades. And this has become a common picture for the last six years which definitely make us elated as it shows that we are rightly keeping pace with the global jump. Is it the case actually, if we look into the matter seriously? As I belong to the education department, each time when the results of any public examination come out I become concerned about it and try to ventilate my opinion. But who cares?

Undoubtedly, it makes us happy to see the increasing trend of our results. In 2007, the SSC pass rate was 58.36%, while the percentage rose to 91.34 this year. A total of 142,276 students got GPA 5 this year, compared to 25,732 in 2007. On the other hand, pass rates in national exams used to stand below 50 per cent about two decades ago in 1990, the SSC pass rate was only 22.82% in the humanities group, while it was 43.63% in the science group, according to the Bangladesh Bureau of Education Information and Statistics. When we have increased the rate successfully, the time has come to think very seriously about the quality as well. We all must think about it. Does the present trend tell us that the quality of education has improved? If not we must find out the causes without being self-complacent.

Some claimed that the old philosophy of not giving full marks to examinees has changed in recent times which contributed to increasing pass rate. Well, before the introduction of the grading system if a student obtained just a first division, the society considered him/her to be a good student without any doubt. Those who obtained star marks were considered excellent students. Today if any student obtains GPA-5 nobody considers it a leak-proof result. If he needs to get admitted anywhere, he/she is to face test again not only because of limited seats but also to learn his/her real position. So, what’s the credit of just awarding full marks or high marks? Does this evaluation actually give real credibility?

A total of 142,276 students—77,551 boys and 64,725 girls—achieved Grade Point Average-5 (GPA-5) which broke all previous records in the grading system. Last year, 91,226 students got GPA 5. All students of 6,210 educational institutions came out successful, making an all-pass record. However, no student passed from 24 educational institutions this year. From eight general education boards, a total of 1,087,870 examinees took part in the SSC examinations. Of them, 1,008,174 examinees came out successful with 122,313 GPA-5.

The authorities claim that because of the introduction of the creative system students have done fair and crossed all the previous records.  The creative system was introduced in 2009 and the education boards started preparing questions reflecting creativity in 2010. After five years of its introduction, teachers could not earn the ability to develop questions on this new system. Academic Supervision Report of the Director of Secondary and Higher Education found in September 2013 that only 55.33 institutions could prepare questions on this new system. 26.10 per cent of schools could do it partially.

Again DSHE in February 2014 conducted another survey and found that 38 schools could not prepare questions by themselves. Causes were identified as teachers’ inability and lack of training. The Ministry of Education says that they have given training in Creative Question to five lakh teachers. But the fact is, most of these teachers could not master the ideas of creative questions which appeared in the dailies many a time. The report also says that not only preparing questions, but teachers also are not teaching the students following the creative system. Under these circumstances, the Ministry of Education has decided to cancel the MPO of those institutions which failed to develop questions of their own following the creative system. This report was published just one week before publishing the SSC examination on a daily. So, it sounds very contradictory when the authorizes claim that results have become so good because of the creative system as students have mastered the art of this new system well.

In English, more than 99 per cent of students have passed. It has been a tough subject for the rural students who constitute the lion’s share of the total number of examinees. English is taught on the basis of four language skills such as listening, speaking, reading and writing. The global research shows that humans communicate 40 per cent through listening, 35 per cent speaking, 16 per cent reading and only 9 per cent through writing. We teach English to our learners avoiding and ignoring listening and speaking skill, It means that we don’t touch (40+35)=75 per cent skills, we don’t evaluate these two significant skills.

We deal with only 25 per cent (16% reading and 9 % writing) skills and give a huge number of students  GPA-5 certifying that they have done excellent in English. The real picture proves the opposite. Our students with rare exceptions cannot understand listening English, cannot speak English even if they are asked to describe themselves. What about reading skill? If a passage is set from outside the textbook we could see how many of them could pass. Just a handful of passages from the textbook are set in the examinations very commonly on any of the boards. They just practice those passages taking help from the guidebooks and do well. In the same way, they cannot write anything of their own except some students of some institutions. But we don’t hesitate to award them a weighty certificate. The matter seems to be funny.

The ministry took a good initiative. Under this initiative, they identified the low performing institutions and selected eight thousand to give special coaching to the students. Obviously, the teachers could not make the students’ concept clear within a very short period which they inherited from primary school and bore it from class six up to SSC level. However, there was an unwritten pressure on those teachers to make them pass as the teachers got remuneration from the ministry for conducting special classes.

The examiners were asked by the board authorities to check the examination scripts very liberally. The worst thing is, the questions of all the examinations leaked out which could not draw the attention of the proper authorities for some unknown reasons. The perpetrators used Facebook to spread the message all over the country. The famous educationist Dr Jafar Iqbal produced two articles namely ‘Can anyone of you tell me?’ and ‘is leaking out the question, not a crime? He reflected in these writings that the nation did not consider the fact of question leak out as a serious matter but it has been killing the vitality of our nation. It is interesting enough that nobody paid heed to it which gives a signal that we are passing through a bad time. When students get the questions in hand before the exams and do well in the exams, can we take the credit?