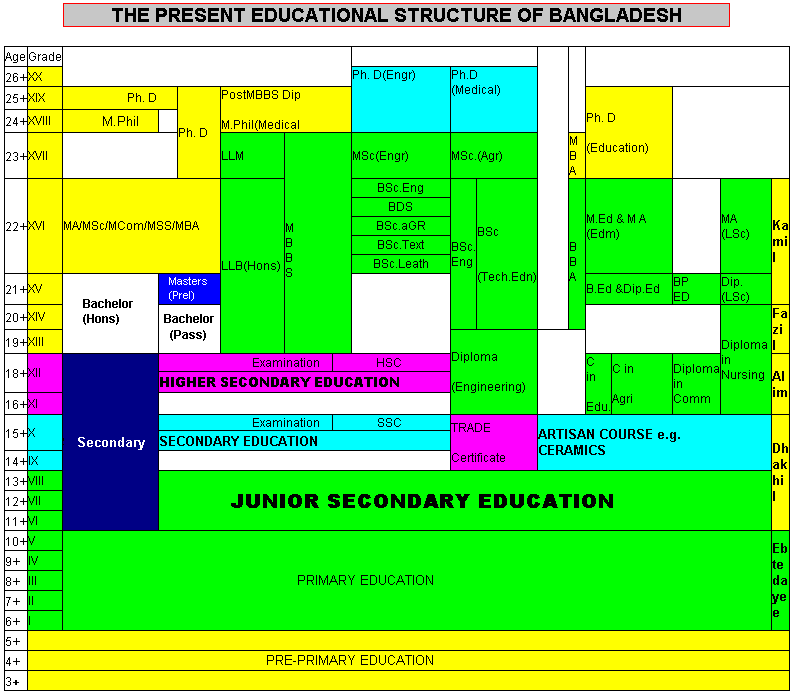 A number of international donors and partners for developments have recently put a special emphasis on helping Bangladesh government in order to improve its TVET sector. ILO’s TVET reforms project is in operation, while identical projects of ADB and World Bank are about to come. Although ILO project is a grant receiving one, the projects of ADB and WB will be operated under loan provision. Global patterns always show that the target groups comprising students for vocational education and training are mostly from the underprivileged background. As a result, formulation and moderation of a TVET policy always receives lesser priority. Although, the work undertaken by well-qualified VET graduates often makes better contribution to GDP, the organization under which the work is done and the country as whole prove to be more productive. Payment issue for VET graduates is a neglected one. This attitude always motivates students and their sponsors against VET education.

A positive association between educational attainment and individual earnings has been well-established and verified by many studies. In spite of this extensive investigation, however, the cause and effect relationships underlying the association are not well-understood. More specifically, one might question whether only formal education leads to higher earning potential or whether vocational training might have a similar effect. In the analysis below, this scribe presents some arguments about the impact of vocational education and training on the earning potential of participants with different levels of formal education. Hopefully, increased understanding of the interrelationships between vocational training and formal education will assist educational and government planners who are currently attempting to formulate policies in this area.

We could imagine a world in which income was determined solely by social status and where education thus raised individual earnings for purely sociological reasons. In the real world we can observe arbitrary levels of formal education required for entry to a wide variety of jobs, without much reference to job characteristics or performance. Similarly, arbitrary promotion of workers to higher levels of pay and responsibility on the basis of educational attainment no doubt occurs, thus reinforcing these artificial entrance requirements. At the extreme, one could imagine education is enhancing income solely by improving prestige and a cleverly forged high school diploma, CPA certificate, medical degree, or plumber’s license. This is as effective as the same credential earned through long apprenticeship or expensive study. However, most economists will feel much more comfortable at imagining a contrasting social order in which economic productivity plays a larger role than social prestige in determining income. In this world, well-trained plumbers, doctors, and accountants will receive higher incomes than imposters because of their higher marginal revenue productivity. The market mechanism will tend to produce this result by the elimination of inefficient firms, so that hiring prestigious incompetents will prove self-destructive and short-lived. The data will allow to conclude this article, but for the moment let us assume that economic productivity determines income.

If, indeed, productive individuals generally obtain higher income than unproductive individuals, then the mechanisms which cause people to be more productive-for example, education and training-should cause them to have higher incomes. In practice, unfortunately, it may be difficult to maintain a rigid distinction between vocational training and formal education, since even the most strongly trade-oriented programs will have some “cultural” content and some “practical” elements are likely to creep into the most academic of curricula. Levitan and Mangum appear to disavow this distinction, however, when they state that “the most valuable contribution education and training can make to preparation for employment is the same one it performs in preparation for other aspects of life: ability to communicate and compute. We will nevertheless make such a distinction so that the benefits from vocational training can be directly assessed.

If vocational training can be shown to have differential impacts for participants with varying levels of formal education-particularly if it can be shown to benefit those with the lowest levels of education most-important policy implications would logically follow. That is, vocational training might then be viewed as a primary vehicle for achieving income equality and a major redesign of the educational process would be suggested. On the other hand, if vocational training does not appear to affect the present income-education relationship, then it appears likely that training is not an effective substitute for formal education or for redistributing income. The findings reported here tend to support this latter view. As indicated by our data, vocational training raises the earning potential of all trainees but does not seem to significantly affect the distribution of income based on educational attainment.

Generally speaking, no significant changes were found in the income-education distribution as a result of training at the Tennessee Area Vocational-Technical Schools. Such vocational training appears to increase the earning potential of elementary school dropouts, elementary school graduates, high school dropouts, and high school graduates, as compared to expected earnings without training. This conclusion resulted from testing, by two statistical techniques, the hypothesis that vocational training will affect education-income relationships. In the first test, a least-square equation of income (as a per cent of high school graduates’ income) regressed on education (as a residual of age among a group of VET students) did not significantly differ from a least-squares equation of a similarly composed education-income distribution representing the national population. In the second test, a VET matrix of income by age and education (divided cell by cell by a similar matrix representing the national population) generated a matrix of ratios whose least-squares regression line (income regressed on education as a residual of age) was not significantly different from zero in slope.

It also included students from a metropolitan area of half a million people, students from relatively isolated rural communities, a proportion of students from indigenous community and minority ethnic community, not greatly different from the proportion in the general population, and a diversity of instructional programs of various length and degrees of difficulty. The extension of these findings, therefore, to other forms of adult vocational training, such as MDTA programs, registered apprenticeship programs, and much training in the armed forces does not seem unreasonable.

From a policy standpoint, the data reported above have both negative and positive implications for vocational education. While there is no reason to question the efficacy of training as an anti-poverty device if poverty is conceived in absolute terms, the Tennessee experience suggests that if poverty is defined in terms of inequality (e.g., with a Lorenz curve, which is not affected by the level of income) then vocational training will fail as an anti-poverty measure. In this respect, training may differ from formal schooling for there is at least some evidence that an overall increase in levels of formal education will lead to greater equality in income distribution, The proportionate gains realized by workers at low educational levels may serve as a warning against the dismissal of low ability and culturally deprived workers as “functional illiterates,” or “unemployables.” The fact that poorly educated students can achieve equal income increments could even be interpreted as a testimonial to the efficacy of vocational training, for these gains are doubtlessly won in spite of very real obstacles.

The Tennessee experience is in line with the claim of Hansen, Weisbrod, and Scanlon that improved vocational training will prove more effective than longer formal schooling for students of low ability (though this decision may ultimately rest on cost consideration beyond the scope of the present article).

The stability of the income-education distribution in spite of the influence of vocational training suggests the importance of sociological variables in income distribution and implies that formal schooling may influence lifetime income by improving prestige as well as by improving productivity. Given only the evidence presented thus far, one’s conclusion on this point cannot consist of much more than supposition, for the observed facts can be explained either by vocational training increasing everyone’s productivity by an equal amount or by vocational training producing some other result, which is then nullified by a prestige effect. It is the authors’ conclusion, however, that the second explanation comes nearer the truth. If the VET students learned a marketable skill, that skill should have the same dollar value for an elementary school dropout as for a high school graduate. That each student acquired the same skill is a reasonable assumption, given the way these schools operated. Entering students elected a vocational goal such as becoming an auto mechanic. The instruction was highly individualized, and though the auto class lasted two years, students were encouraged to leave school as they became employable in their chosen field.

Few of them stayed for the entire two years and, if the system worked properly, the main difference between the best and the worst students was the length of stay and not the amount learned. If this is the case, and if incomes are a strict function of productivity, one would expect income increases to be an arithmetic constant, and the income distribution to be changed. However, this outcome was not attained, as our data indicate.

This does not mean that marginal productivity cannot explain the observations, but simply that other explanations appear to be more satisfactory to us. We can offer no better conclusion than that of Barbara Wootton: The contemporary wage and salary structure . . . (is) the accumulated deposit laid down by a rich mixture of economic and social forces, operating through considerable periods of history…. At every point, the economic and sociological forces act and react upon one another to produce a result which is quite inexplicable if either is left out of the reckoning.

In conclusion, the present writer would like to note that increasing the number of VET graduates and their salary potential will not offer us any simple solution for our development until and unless we ensure (1) good quality and well-timed VET education (2) an international market for the products produced/ manufactured by the VET graduates. Most of the scholars may argue that the export of VET graduates will ensure us a better income which this scribe falsifies by my earlier article on ‘Brain drain.’ There is a catch here. Once we start to export more skilled and knowledgeable individuals that may lead to ‘brain drain.’ Since when such individuals migrate, they become part of the economy of the country where they settle as second homeland. Export of skilled manpower is not a solution, rather export of products or goods produced by the VET graduates offer us the prospect of a better economy.