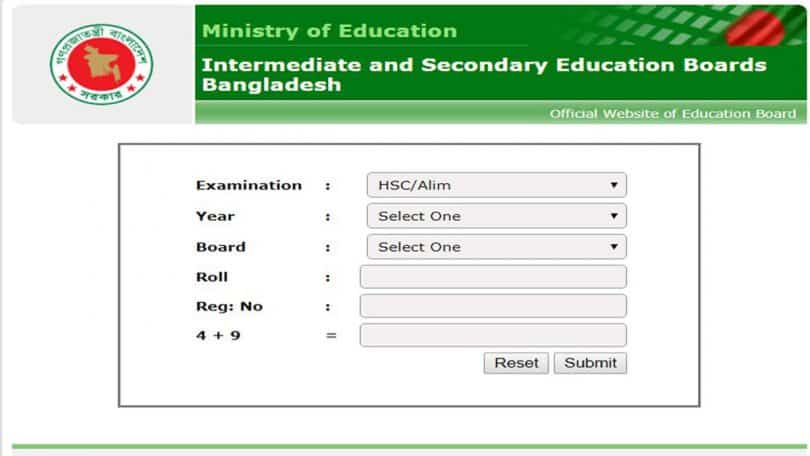 The results of the Higher Secondary Examination or HSC result help students determine the future course of study and aim of life. Hence, it attaches much importance. This year 74.30 per cent of students passed the HSC examinations against 78.67 per cent of the previous year. Besides the pass rate, the results also showed a decline in the number of highest grade point average (GPA) holding students as the figure this year is 58197 which were 61162 in the last academic year. The statistics show that 744891 students out of 1002496 passed under the ten education boards of whom 393899 boys and 350992 girls. Among the general education boards, Sylhet board positioned first with 79.13 per cent success, followed by Rajshahi Board with 77. 69 per cent and Dhaka Board with 74.04 per cent success. The pass rate under Dinajpur Board is 71.94 per cent, Barisal Board  71.69. Jessore Board 67.49 per cent, Chittagong Board 61.22 per cent and Comilla Board 61.29 per cent.

The overall pass rate has dropped by 4.37 per cent compared to last year. Over this issue, our political masters have started the debate and playing the blame game “The BNP and Jamat-Shibir must accept responsibility for this as 32 HSC examinations dates had to be changed due to strikes.  The examination date of the English second paper was changed four times. Finally, it was held at the end of all other examinations.  It was scheduled in the first phase. The frequent change of dates affected the examinations and put pressure on them” The government side tells these points to the opposition. They continued that the opposition parties never bothered about educational institutions and the future of students.

That is why they kept calling hartal during SSC and HSC examinations. BNP and Jamat are answerable to the nation for spoiling the students’ future.” These apparently patriotic words hardly soothe the minds of the students and the general public as they find no difference between the natures of political activities of both parties. The party which remains in power talks a lot about the future of the nation, education, students, educational institutions and whatnot. When they occupy the place of the opposition, they forget these moral words and resort to any kind of violent program at the cost of countrymen’s untold miseries. So, no party’s claim rouses the attention of the students and general mass.

The opposition directly says the result has declined because of the wrong decisions of the government. They have introduced ‘creative questions’ in four subjects which the students could not understand well inviting the declining results in the HSC exam. This claim does not sound reasonable. In this age of competition creative question is a must in the secondary and higher secondary levels. So, it was not a wrong decision. Again, frequent hartals during the HSC examinations definitely disturbed the whole examination period. They underwent intense psychological pressure amid a sense of uncertainty in their life.

Frequent changes in exam routines surely baffled the examinees and hindered their preparations which the opposition cannot evade. Salahuddin Qusar Biplob, associate professor, psychology at BSMMU said, whenever any unexpected incident crosses somebody’s tolerance level, it creates stress ‘ similarly unexpected things during examinations could lead to stress, fear and lack of concentration and their impact manifested in the results. Students could not do well in English and Chemistry. The pass rate in English in eight education boards is over 75 per cent against 80 per cent last year. In Chemistry 77 per cent is this year and 85 last year. This is the effect of the introduction of ‘creative question’. Really it is a matter of appreciation that the government introduced it but the whole teaching community was not well aware of it and the result reflects it.

We cannot deny the fact that the urban areas enjoy a more advantageous position for some practical reasons. We cannot, to speak the truth, avoid it. This advantageous situation gives more facilities to the urban educational institutions and its impact must appear in the public examination results. What we can do is to look with judicious eyes at the rural institutions. Suppose, good teachers can be given incentives to work in rural schools and colleges. It will ensure some quality teaching which now remains absent.

SM Wahiduzzaman, examination controller of Dhaka Board said apart from the political turmoil, ‘creative questions method’ in four subjects including Chemistry, business entrepreneurship. More educationists and officials blamed a dearth of skilled teachers, lack of infrastructure such as laboratories and libraries in colleges in rural areas for the poor performance of students in such areas in public examinations. As in the past students of educational institutions in urban areas did well than the students in rural areas although the government claims that it has taken measures to address the rural-urban disparity. No government college in rural areas could earn a place among the then best institutions in four general education boards, Dhaka, Chittagong, Sylhet and Dinajpur which clearly manifests this divide.

Another point must be taken into consideration. These results don’t say everything. Almost all the colleges don’t send all the students to sit for HSC examinations. They send the selected students to sit for the public exam and this selection is made through internal examinations. So, who will take the responsibility of these students who could not appear in the public examination even though they got enrolled in the institutions and have studied there for two years?