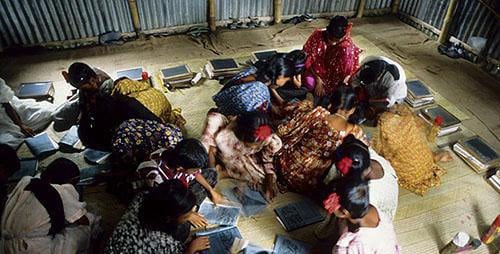 Attacking poverty has become an international concern for placing in the paradigm of ‘education and learning for sustainable development’ in consideration of the reality that almost half of the world’s population live in poverty. The world has deep poverty amidst plenty (World Bank, 2000). Based on the recognition that formal education programme has failed to become adequately responsive to the needs, particularly of the poorer/disadvantaged sections of people, Non-Formal education programme has evolved in various form as a strategic intervention for poverty alleviation (Islam & Mia, 2007)

Non-Formal education (NFE) is a purposeful and systematically organized form of learning that generally occurs outside the formal educational institutions. It is designed to meet the learning needs of educationally disadvantaged persons of different ages and backgrounds, flexible in terms of organization, time and place may cover basic and continuing educational programs to impart basic literacy, including life skills, work skills, general culture and facilitates lifelong learning and enhancement of earning capabilities for poverty reduction. It ensures equity in access and human resource development; it may or may not follow a ‘ladder’ system and may be of varying duration. (Bureau of Non-Formal Education, 2006). This education is called Non-Formal because, (a) It is not compulsory (b) It does not lead to a formal certification, and (c) It may or may not be state-supported.

Mission and Goal of Non-Formal Education

The mission of NFE is to provide access to life-long learning opportunities for improving the quality of life of children, youth and adults including those with special needs and who have missed out formal education; and equip them with adequate knowledge, productive skill and life-skill through relevant and high quality learning opportunities, including literacy, basic education and continuing education programs.

The goal of NFE is to contribute to fulfilling EFA goals and alleviating poverty as spelled out in the National Plan of Action II, 2004-2015 and the Poverty Reduction Strategy Paper (PRSP), by creating a community based network of learning centres, aimed at reducing illiteracy by at least 50% by 2015, extending opportunity for effective skill training and continuing education and creating lifelong learning opportunities. (Bureau of Non-Formal Education, 2006)

Illiteracy, poverty and abeyance of democratic values, institutions and norms are hindrances to participatory development and progress. The government recognizes that NFE, by expanding literacy and continuing education opportunities, especially to disadvantaged groups, can equip people with knowledge and skills to improve life and livelihood. The government looks upon NFE as a key element of the effort to offer lifelong learning opportunities and creates a learning society in order to meet the challenges of the 21st century. The government has emphasized the link between education and poverty reduction, removal of illiteracy and building human capital for national development. The government priorities and goals are reflected in the periodic national development plans, Poverty Reduction Strategy Paper (PRSP) and the National Plan of Action for EFA, as well as various NFE projects with support of development partners. Partnership building among all who can contribute, especially the role of NGOs & CBOs has been well organized.

In may, 2003 MOPME formed a National Task Force (NTF) headed by the advisor to the Honorable Prime Minister for primary and Mass Education, for the development of a National Policy Framework for NFE. The consultancy team which assisted the NTF, submitted report to the NTF in June 2004, following a series of meetings and workshops. The proposed policy framework report for Non-Formal education in Bangladesh, prepared under auspices of the National Task Force, presented the vision, mission, goal, objectives and scope of NFE and its potential clientele groups. As an input to discussions and consideration of policy and organizational framework, an analysis of effectiveness of erstwhile DNFE as an organizational entity was also undertaken. (Bureau of Non-Formal Education, 2006).

Importance of Non-Formal Education in Bangladesh

Bangladesh is classified as one of the poorest countries of the world. Data published by UNESCO rank Bangladesh in the thirty-first position out of thirty-five countries for which GDP data could be given. The national literacy rate has increased significantly but 34% adult people are still illiterate (Bangladesh Bureau of Statistics, 2002). The labor force, with the growth of population, will continue to grow for about 50 years more till the population becomes stationery. It is estimated that the labor force will grow from 55 million to 100 million over the next 20 years.

The country has 6.6 million child labor force (aged 5-14), but in reality the number may be higher. Over 4 million of these children work in agriculture in rural areas and in informal sector in urban areas. The poverty line (daily intake of 2122 K. Cal a day) reveals that 36% people live below the poverty line. Thirty seven percent are rated most vulnerable, and forty six vulnerable (Bangladesh Bureau of Statistics, 2000). The present trend of the socioeconomic conditions in Bangladesh in terms of literacy rate, population growth, per capita income, and employment situation are improving but inequitable distribution of resources (e. g., income, land) deteriorate the situation. Twenty percent people has only 8.7 percent share of total income while the highest 20% people has 42.8 percent share of total income (The World Bank, 2000) and 84% people acquired small farm 0.05-2.49 acre land (Planning Commission, 1998).

Some NGOs are relatively new in the field and their emergence has been prompted by foreign funding channeled through government projects or directly by the foreign NGOs with Bangladesh Government approval. A good number of NGOs have vast experience as they have been working for many years. Some NGOs follow traditional approaches and some have been trying to evolve new approaches. It is worth exploring those programmes which have innovative interventions linking Non-Formal education with poverty alleviation. For such programmes it is important to identify their strengths, weaknesses, replication prospects, sustainability and acceptability in the community.

In spite of the outstanding growth towards universal basic and primary education there are still many left outs of the system. They constitute drop-outs of the enrolled students and non-enrolled, mostly among the rural poor. Besides the Non-Formal education programme operated by NGO small and big-the government has administered a member of big Non-Formal education projects nationwide. The thrust of the government project has been toward promoting literacy aimed at the goal ‘Education For All’. Some of the government projects have been implemented by NGOs, as partner (contracted) agencies, although supervised and monitored by designated government staff.

Non-Formal education operates alongside the formal education system. It is flexible in terms of curriculum, organization and Management, responsive to the needs of special groups of learners and is inclusive of all who wish to learn. Continuing education combines under Non-Formal education in a limited way literacy with life improvement skills in consideration of practical needs of different population groups. There are many barriers to Non-Formal education and livelihood skill training, as far as the goal of alleviation of poverty is concerned. The barriers are at the level of the illiterate poor and also in the nature of Non-Formal education programmes and quality of management.

Identification of appropriate model to alleviate poverty of the people is an important area of in-depth investigation and it is a major concern of the Government, NGOs and the development partners. The Government of Bangladesh undertook several projects such as Integrated Non-Formal Education, Non-Formal Education Project– 1, Project– 2, Project– 3, Project– 4, Post-Literacy and Continuing Education Pilot Project to address illiteracy (DNFE, 1999) and in a very limited way, the poverty issues.

The Government has been planning to undertake Post-Literacy and Continuing Education for Human Development Project with the financial support of World Bank, Asian Development Bank (ADB), Norwegian Assistance for Development (NORAD) and Swedish International Development Assistance (SIDA). The most recent thrust of Non-Formal education project, named post-literacy and continuing education for human development is on skills training and income generation for poverty alleviation. (Islam & Mia, 2007)

“(A) Establishing a uniform, mass-oriented and universal system of education and extended free and compulsory education to all children to such stage as may be determined by law;
(B) Relating education to the needs of society and producing properly trained and motivated citizens to serve those needs and;
(C) Removing illiteracy within such time as may be determined by Law”. (Bangladesh Constitution, 1996).

Non-Formal Education has come to occupy an important place in national efforts at development, both in public and private sectors, particularly following the World Conference on Education for All (WCEFA) and the World Declaration on Education for All (EFA) adopted at Jomtein, Thailand in March 1990 and Dakar Framework for Action (DFA) in 2000. As signatory to international instruments like, United Nations Convention on Elimination of Discrimination Against Women (UNCEDAW) and United Nations Convention on the Rights of the Children (UNCRC) among others, those re-affirms and enshrine the right to education. Bangladesh is fully committed to achieving the EFA goals by providing quality basic education for all with the aim of building a democratic policy to fulfilling people’s aspiration and national development. (Bureau of Non-Formal Education, 2006).

At present Non formal education has become an important phenomenon in Bangladesh. So, the national authority designated to promote Non-Formal education /continuing education has to work based on clear guidelines, which can be formulated with the participation of all stakeholder groups. The Government of Bangladesh should set standards corresponding to grades/skills and the requirements to be fulfilled for standards at various levels of continuing education keeping in view the poverty alleviation objective.

NGOs interested and engaged in continuing education should be supported by the national authority to work in fulfillment of definite standard(s), Supervision and monitoring system should seek to ensure compliance with the standard(s). Continuing education programme should be monitored and assessed with particular consideration given to the process and outcomes in the light of poverty alleviation objective. Continuing education programme management should establish a database for learners and a follow-up system for the graduates moving into the market situation for employment.

Education and skill learning through Non-Formal education has to be accredited by the authority as a necessary part of the education system. Every learner should be given information on the skills, job market, future prospect, so that he/she can take decision based on analysis and own assessment. The curricula and syllabuses should be prepared by experts having practical, as well as sufficient theoretical expertise and familiarity with practical work setting.