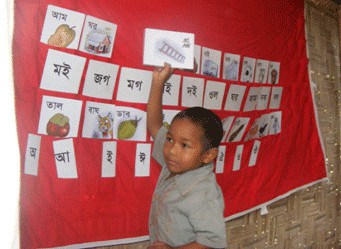 The Kajoli Early Childhood Learning Model is a pre-school model innovated through action research. One of the earliest decisions of RIB was to support an action research project on educational needs of the economically under privileged community. The action research began on 1 January 2003 in Kajoli, a village located in the Sreepur thana of Magura district in the south west of Bangladesh. The main objective of the project was to develop an early childhood learning model specifically for children from the under privileged communities in Bangladesh.

By April 2008 this model has been adopted in 135 centers (villages) in 26 districts in Bangladesh. This was possible because RIB solicited interest from individual volunteers to actively involve the community in setting up a learning centre and sustaining it. The volunteer was to be seen as an Agroni or champion. An advertisement in the media has led to numerous applications. RIB is still being inundated by applications from prospective Agronis to help give necessary technical assistance like training, advice and logistic support to help open more centers in disadvantaged communities all over the country.

There are two key words in the title. One is ‘empowering’ and the other is ‘marginalized’. What do these terms mean in practice.? Empowering implies agency. For example A is a boy. He does not know how to read and write. When someone teaches him how to read and write, he feels empowered. One can be empowered in different ways. The other word in our discussion is ‘marginalized’. ‘Marginalized’ refers to a group of people who are deprived of opportunities and have no share in the advantages enjoyed by others. Basically it means being in a disadvantaged situation. When we use the term ‘marginalized’ some questions arise. How does a person become marginalized? What factors contribute to marginalization ? I think there can be many reasons for a person’s marginalization. For example an ethnic or religious minority group can be marginalized because they do not have the same opportunities as others, or are excluded from participation on account of their differences. People who have no money, no influence can be marginalized for economic or political reasons. In this regard, we can say a rich man or a person of the mainstream can become marginalized. The sense of marginalization is multi-dimensional and refers to people who are deprived or disadvantaged both socially and economically, in different cases and situations.

Now let us try to understand how the marginalized can empower themselves? Different tools and methods are used and different paths found towards empowerment.  Education or knowledge can be an empowering tool for the marginalized. Other ways are by enhancing autonomy income levels, financial, improving health conditions (well being), increasing active participation in family and society, and building community initiatives to change social relations.

How does education empower the marginalized? In my earlier discussion I tried to mention that Kajoli Early Childhood Learning (ECL) Model is a pre-school model that creates an easy environment for 5+ aged kids to learn to literacy and numerically. In 2007, there were more than a hundred Kajoli ECL centers in different parts of Bangladesh. In every centre there were 26 children. Last year about 2,600 young children completed a one year course in a Kajoli center, after which most of them were admitted to government primary schools. Some of them were admitted to government registered primary schools. Few of them are attending NGO schools. Thus, we can say that last year at least 2,600 young children to get better chance to start their formal education life. After completing Kajoli ECL curriculum they were able to join other children in regular schools. Otherwise this model has been beyond the dreams. Let us see in what ways the community was empowered.

In Kajoli ECL centers, children come from the most disadvantaged families in a community. They are economically disadvantaged and their guardians are illiterate. They have no interest in sending their kids to school because they think that education is costly and not of use to them. They prefer to send their children work to earn money, which is more useful for their family. The Kajoli early childhood learningmodel offers pre-school activities different from those of other schools in Bangladesh. The first major difference is in the method used to learn reading and writing through the recognition of words, and the second is in the social cohesion and sense of ownership amongst the participants, their parents and the community.  The community becomes involved. By planning to set up a Kajoli ECL center in the locality. They meet together to discuss the Kajoli Model. Generally one person plays a lead role in starting a center. In the Kajoli model we call him a Champion because s/he is the initiator. S/he is not only a Champion but also a social change agent. The community contributes a space/room/a house for 4 hours a day for the centre, free of cost. Secondly, they select a teacher always a woman to run the centre and help the children learn. Her salary is paid from contributions by the community. And finally, providing a mid-day meal is a very innovative idea of the Kajoli ECL model. Each mother cooks lunch once a month for all the 26 children. The mothers were convinced that this would not be a burden as they would not have to cook food for their child on the rest of the 25 days in a month. They were also assured that their children would be fed regularly throughout the month. In fact this practice of providing food to all children in a centre once a month makes the mothers proud, and gives them a sense of ownership. In this way, Kajoli ECL Model empowers a marginalized community.

The Kajoli early childhood learning Model is designed for the most under privileged and disadvantaged children in a locality. Naturally their parents comprise the lower strata of society. They do not have enough money, land and/or educational training. RIB is currently supporting an action research in Kishorgonj thana in Nilphamari district. in the north west of Bangladesh,  through which women have been able to improve their livelihoods and sustain themselves during the periods of acute scarcity (monga), which occurs in this region between September to November. The action research has been started in July 2007. The main objective of the study was to find out a way of sustaining the Kajoli ECL model without using external funds and try to form a local institution by the guardians centered at the Kajoli early childhood learning model. The newly form local institution will look after the center. Here the table shows result of the action research.

Table No 1. Kajoli Ma ‘Shonggathons’, there savings and nature of activities since July 2007.

In table 1 we can see 71% of the centers have been formed and organized successfully. It is a significant result from the study. In 8 months 15 Kajoli Model Ma (Mother) organizations deposited a total of 72,700/= taka which is a substantial sum. It means that the collective initiative is stronger than a single action. The table shows that 68.22% of the deposited money is used in income-generating activities, like cow and goat rearing by the organization’s members. In rural Bangladesh, women are marginalized because of their dependent status in the family. The research showed that the majority of the members of the Kajoli early childhood learning Model were women, basically, house workers. They had no scope to come out, to earn, and did not make a decision for their family. In this table we find that 447 women members of the 15 Kajoli Model Ma ‘Shonggathons’ in the Nilphamari district have found a means to earn and this has enabled them to take decisions for their family. Coming together in their organization they have started community based income generating activities, which provide feedback within the 8th month.  In addition, they run 15 Kajoli early childhood learning Models in their locality. It is an indication of how the marginalized in Bangladesh are able to create opportunities for improving their lives.

Panchopukur Milpara is a small village at Nilphamari Sador in Bangladesh. A Kajoli centre has been opened there with the help of Kajoli Mothers Organization. Each member of the organization contributed 100 taka to buy a van, and leased it on a daily basis for 20 taka per day. The income from this van is used to provide the monthly salary of the Kajoli teacher. The members have formed a management committee which is in charge of receiving rental from the van, keeping the van at night and paying the teacher’s monthly salary. Through this process women who have come together in an informal organization for running such centers are beginning to take important decisions for the advancement of their families. In conclusion, we can say that the Kajoli ECL Model, through such self-help activities, has demonstrated a viable way for empowering the marginalized.