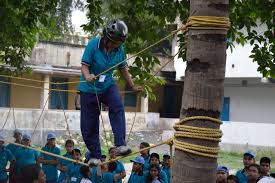 Over the years, Bangladesh has confronted the challenges of natural disasters and tried to mitigate the risks associated with different disasters. Due to severity and wildness of natural disasters, ‘education’ – as one of the core sectors – offended in a regular phenomenon in Bangladesh. Although disaster management in Bangladesh has received high attention from different corners and a paradigm shift placed from conventional relief and rehabilitation to comprehensive disaster management, unfortunately Disaster Risk Reduction in Education (DRRE) is yet to be addressed in a proper way both at national level policy instruments and local level implementation plans. Although Education Cluster of Bangladesh has been initiated number of projects, rolling out capacity building workshops and orientations for development activists and district level front line officials of government focusing on the issue of Education in Emergencies. The newly formulated education policy has limited the issue by using few words and Primary Education Development Program (PEDP3) considered only minimum number of orientations.

Statistics reveal devastating damages in education sector by different disasters across the country. On average 900 schools suffer severe damage from floods, cyclones and river erosion in every year while more than 4,666 schools are affected by disasters per year by any means. In 2007, flood and cyclone damaged 93% of schools in the affected areas while 4,489 primary educational institutes were damaged, among which in 19 districts 784 primary institutions were completely damaged. Estimated Costs of damages (fully and partially) is around US$ 30 million. In secondary education institutions, 750 school/college buildings were fully and 3,000 were partially damaged. Based on the average value of the school/college building and repairing costs, the value of fully damaged school buildings is BDT 1,680 million and of partially damaged is BDT 1,149 million. According to ‘UNICEF Situation Report 2007’ and Ministry of Primary and Mass Education, 44 schools washed away by river erosion throughout the country while 4,444 schools were forced to shut down. Besides, 292 primary schools functioned as flood shelter in 2007.  As per Damage and Need Assessment Report 2008, cyclone SIDR alone an estimated 5,927 educational institutions fully or partially damaged, resulting in a total value of damage and losses of BDT 4.7 billion.

In this backdrop, children are among the most vulnerable population. Roughly one billion children aged 0-14 live in countries with high seismic and other disaster risks. Several hundred are at risks when they are attending schools. School-going children spend about 30-35% of their time in the school (in a 24-hour day-night period) (Plan, 2012). During disasters, school buildings are destroyed, taking away the precious lives of children and teachers and stalling access to education in the aftermath of disaster. Rebuilding these schools can take years and are very costly.

On the other hand, economic condition of affected family in post-disaster situation does not allow many students to attend school. A significant number of students are displaced and migrate with their families to long distances due to loss of their dwelling and homestead. Interrupted roads and communication is one of the major hindrances for children to join schools just after disasters. Many families cannot afford the expenses for boat or any other extra transportation to send children to schools due to water-logging, inundation, destruction of bridges, roads, culverts and jetties. Accordingly, it makes cost barriers for the children from poor families and families without work. Causes of exclusion intensified by disasters include losses of cloths/school dresses, lack of security. Another added access-barrier is experienced by the children with disability as their special needs are addressed indifferently. Deterioration of health condition during disaster and psychosocial shock makes children unable to attend schools, even if the schools reopen early.

In addition, disasters also destroy learning materials, school furniture and stationeries, hamper logistic support and make school environment unhygienic; these have impact on both qualitative and quantitative education outcomes. The sheltered people make the school premises unusable and thus, many latrines, tube-well stopped permanently and in many cases furniture uses as fuel. Alternative use of schools as flood/cyclone shelters reduce the total contact hour and compromise the quality of education. Under existing centrally managed education system, there is little scope of making education centres at the grassroots responsive and accountable to make the community prepared for disasters early and reduce the risks.

It is well known that as social institution, school has the ability to train the learners and the community at large to be disaster resilient by providing information, developing skills and leadership among the children and communities. Schools can be built in such ways that may provide safest shelter during any disaster, especially during flood and cyclone while this centre can also be utilized as the heart of warning dissemination. Learning disaster risks in primary and secondary schools can help children to play an important role in saving lives and protecting the members of the community before, during and after a disaster occurs.

Thus, disaster education should clearly incorporate in curriculum and textbook. Making disaster risk education an integral part of the national school curriculum will help to build greater awareness and culture of safety of the issues across entire communities. But it should be transferred to the students in the classrooms and proper orientation of teachers is prior demand. In addition, school based Risk Reduction Action Plans (RRAP) and its practice, issue based task force formation involving SMC, PTA and students, formation of school safety networks led by district education office, development of seasonal calendar and effective implementation of action plan can help to reduce the disaster vulnerability in education. The RRAP can be implemented in line with ADP implementation. Investing in strengthening school structures and small scale mitigation works can reduce long-term costs, protects generations of children and ensures educational continuity after the event.

There is no doubt that educational attainment is a fundamental determinant of human vulnerability and marginalization. Basic literacy and numeric skills enable individuals to become more responsive towards coping with disasters. But disaster preparedness and mitigation requires building a culture of safety which can only be promoted under a comprehensive knowledge management system by generating a certain level of knowledge, innovation and education which can be disseminated through formal, informal and non-formal means of education.

If disaster risk education could be mainstreamed into school education and proper skills, knowledge, information would have been disseminated only to formal school learners, according to the statistics of Bangladesh Bureau of Education Information and Statistics (BANBEIS, 2005), about 25 million students would have been aware of DRR and played an effective role in disaster risk reduction. Moreover, if only 25% of total learners are assumed to effectively communicate and convey the key massage of DRR to their families, more than 24 million people would be aware of DRR (Household size 4.9, Census 2001, BBS). And if education needs and rights of children along with right to food and shelter are recognised as immediate response then emergency response may reduce the threats of less affect of children. This is the right time to take the issue on board OR has time already passed away?