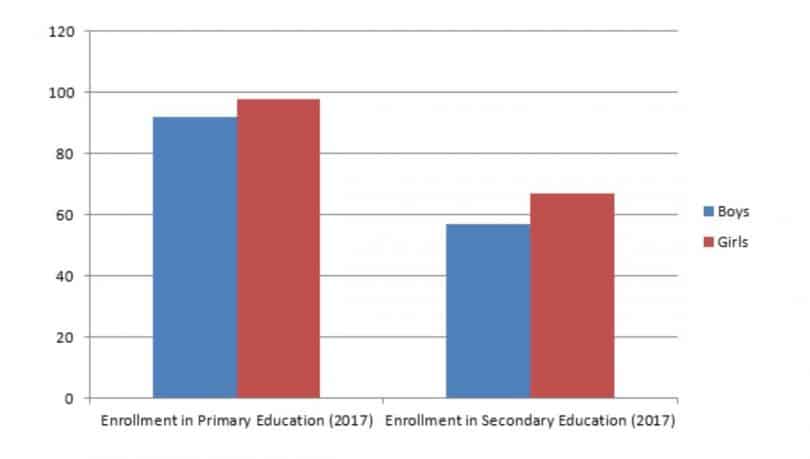 Most of the south Asian countries possess some common characteristics. These countries are considered as less developed countries or developing countries. Almost all of them experienced colonial rule and they inherited significant levels of poverty after getting freedom from the colonial masters. Moreover, the population of these countries are very large in number, but most of them have the low levels of skills, achievements, and their participation in schooling are not very significant.

About half a century ago, these countries got freedom from their colonial masters and during this period of 50 years all of them achieved some success in human development condition. The United Nation Development Programme  (UNDP) introduced Human Development Index (HDI) as a scale to measure the status of human development of a country.1

The State of Education in South Asia and Bangladesh

To measure the achievements of the state of education of a country one has to address the issues of literacy rate (male and female), gross enrolment rate (primary and secondary), public expenditure on education, pupil-teacher ratio and so on.

In South Asia, India and Sri Lanka spent the highest portion of GDP in Education and among them Bangladesh spent the lowest level of public expenditure in education sector during 1990s. However, all these countries expended their maximum part of education budget in primary education. (table1.3)

Note: a= Data refer to Ministry of Education only, b=Data refer to combined expenditure for pre-primary, primary, secondary levels proportion for this purpose. All these countries disbursed highest level of expenditure in primary education.

Thus, from the above discussion it can be concluded that

•    Public expenditure on education as share of GDP in Bangladesh is the lowest vis-à-vis the South Asian countries.

•    The adult literacy rate and combined enrolment rate in Bangladesh is still lower than the average level in South Asia and not good achievements. In fact, among the South Asian countries, Bangladesh is at present ranked as the lowest performer in education sector.

1This is a composite index incorporating the three fundamental achievements: a long and healthy life, knowledge and a decent standard of living The HDI value for a country is calculated by taking three dimensions:

•    Standard of living, as measured by real GDP per capita based on purchasing power parity in terms of dollar (PPP$). (Jhingan,1998)

2The countries with the value HDI lower than 0.5 and between 0.5 to 0.799 and above 0.8 are considered as the low and medium and high level of Human developed countries, respectively.