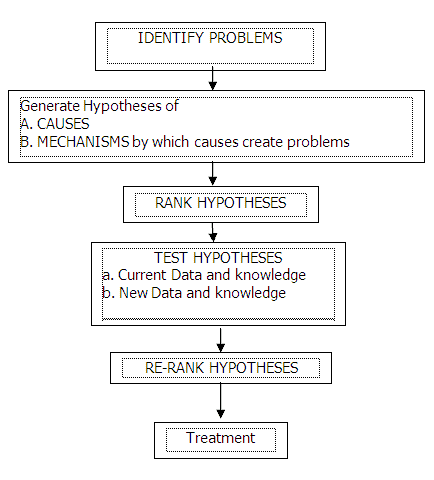 With the discussions continued here on problem based learning it will be cleared to the reader how these two distinct yet related approaches to learning is integrated in PBL. However, much of the activities in a PBL approach pivot around the philosophies of Socrates. It is, therefore, required for a reader of this article, who is being orientated to PBL for the first time, also get introduced to the detailed philosophy of problem based learning to conceptualize the simplified translations of the taxonomy of Socratic questions. I should add here that often after the most learned professionals have been introduced to the process of PBL without the exposure to the philosophy runs into the risk of conceptualizing PBL as common sense and has been always in practice (“so what is new anyway?”).

What is important here to acknowledge is that PBL has a very strong foundation in philosophy and theories. Without taking these into account, the objective of PBL is either achieved in a non-standardized and through a derailed path or does not achieve its success at all. However, whether the process of PBL has achieved its objective and has any potential advantage over other teaching-learning methods can only be assessed through proper assessment structure.

Coming back to the philosophical discussion surrounding PBL, the taxonomy of Socratic questions, created by Richard Paul, is not a hierarchy in the traditional sense. The categories build upon each other, but they do not necessarily follow a pattern or design. One question’s response will lead into another category of questioning not predetermined by the teacher/facilitator. In keeping with the PBL philosophy, this aspect of the model is most conducive! The role of the skilled teacher/facilitator is to keep the inquiry “train on track,” but, also, to allow the students to “travel to a viable destination” of their own design. The role of a tutor will be further discussed later in this article. Meanwhile a reader might imagine him or herself as either a facilitator/tutor or a student while going through these questions phrased in a truly generic manner. It is advised that readers emphasize on the relationship between the questions and how one question is naturally leading to the other, very minutely & in a very well thought-out way – looming for explanation of a problem & its solution. Once the reader is able to capture (and as a result internalize) the essence of these questioning as a student, he/she is prepared to achieve the basic quality required for conceptualizing the natural process of problem-based learning. The reader will also notice that the questions are very well sequential. However, I have slightly modified the table on the taxonomy of Socratic questioning so that it proves extensively congruent with other concepts of PBL discussed further:

The following table has been adapted from: Paul, Richard, Critical Thinking: How to Prepare Students for a Rapidly Changing World, 1993.4

Questions that Probe Reasons and Evidence

It is noteworthy that Hegelian approaches in thesis-antithesis-synthesis are achieved from these sequential questioning of Socrates and also is encircled by the philosophy of Cognitive constructivism of Piaget and Social Constructivism of Vygotsky (see the previous post of this article).

As said previously questions might be asked while imagining one’s self as a student. Equally important is when a teacher directs a student (as well as creates non-threatenting and motivated ambience) with the above questions while facilitating a PBL session. As we will see later that the role of a teacher would be to simply facilitate, like other facilitators in focus group discussions, or group works in workshops. So, taxonomy of Socratic questioning would serve as the founding principle upon which the rest of the processes of a practical Problem Based approach will proceed. It is, therefore, important to know in details what are the roles of questioning in Problem Based Learning. It is note worthy that one should not strictly consider the taxonomy as the only means of guidance. Newer questions with exquisite modus operandi could be generated in the mind of talented readers and as long as they are targeted, to meet the demand of PBL should equally serve the purpose and given the credits. Since PBL is still a growing field contextualizing the fundamental philosophy to suit situations is something that should be practiced for its constructive development.

The Role of Questioning in Problem-Based Learning

The use of open-ended, probing questioning when initiating and perpetuating inquiry into the ill-structured problem is a key component to the success of the PBL experience. This is in contrast to seeking information from students in a conventional classroom battering with questions that demand merely an exercise of their memorizing capacities.  Thus a strategy known as Socratic questioning was designed to elicit a wealth of ideas and facts from any group. When using Socratic questioning with younger audiences, considerable patience, coupled with a warm and inviting classroom atmosphere is crucial. Socratic questioning promotes the synthesis of information into discernible categories of “fact” and “opinion.” This strategy will attempt to:

While it is difficult to establish a concrete format for questioning within a variety of circumstances, Socratic questioning includes taxonomy of questions that may be utilized diagnostically as the teacher/facilitator moderates discussion and verbal inquiry. The categories are as follows:

One example of modifying these concepts and putting them in practice is a framework developed by the state of New Mexico’s Medical College- popularly known as clinical reasoning outlined below: