Home | What do the readers think about the site www.bdeduarticle.com 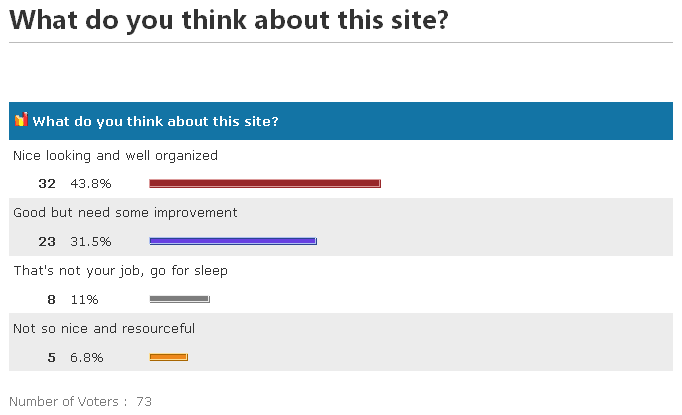 The journey of this site has been started at March 14, 2009. From the first day of its starting, a poll was placed at the right place of the site. The question of this poll was ‘What do you think about the site’? The answers were a) Nice looking and well organized, b) Good but need some improvements, c) That’s not your job, go for sleep and d) Not so nice and resourceful.
A total of 73 readers participated on the poll though the expectation was much more higher. In the mean time, a notice was sent to the subscribers as well as another readers through twitter, facebook etc. to attend the poll and send their valuable suggestions and comments.
Among the 73 participants, 32 (43.8%) mentioned that the site was nice looking and well organized. A good number of people, i.e. 23 (31.5%) gave opinion that that was good but need some improvements. On the contrary, 8 (11%) thought that that was not my job to build and maintain that type of site and 5 (6.8%) readers considered it as not so nice and resourceful.

Some of the readers sent their opinions and suggestions by email. Five of them said that the out-looking of the site was not so good and need to be changed. They also mentioned that this design does not match to the character of the site and site contents. One mentioned clearly that as this site was made by Joomla CMS, so we should use a specific template or design only for the site instead of default template.

Two readers said that the articles of this site were not so much rich as they expected. They suggested to contact to the famous writers as well as collect articles from the experienced writers. Another reader said that she did not happy to see the google ad in this site. She requested to delete ad contents from this site.
Some of the readers complained that sometimes the site opened slowly. Three readers thought that the site administrator was not experienced enough to run that type of ‘intellectual’ site. S/he should spend more times on it and need to learn how to run a web site. Besides those, some of the readers pointed out some strengths of the site, but it is not mentioned here because all of you already know those.

Our say regarding readers’ opinion and comments
We would like to thank first all the readers and users of this site. Especially, thanks to those who attend the poll and sent their opinions as well as suggestions. However, we are trying to make this site nice looking and to give a professional outlook. We are also trying to buy a special template or design only for the site. At the point of quality of the articles, we should say that some of the articles of this site were nice enough. However, we are trying to collect more articles from the professionals which can meet the readers’ demand. On the other hand, we are trying to improve site’s internal coding so that readers can open the site quickly. Regarding the google ad, we are sorry to say that we had a plan to keep those. Because we took another initiative to make such type of education related site in Bangla language. Those ad could be a source of fund for that site.

However, we are very much grateful to all of you. Like the present, we expect all of you with us in the future. You are very much requested to send your education related articles, opinions and suggestions regarding the site anytime. Thank you all.